Dad and I drove to Calhoun this winter in response to a CL listing for a hay wagon.  The price was right so we brought it home.  Originally this wagon was grain tight.  Years of outdoor storage had taken its toll on the wood and there really wasn’t much left of it. 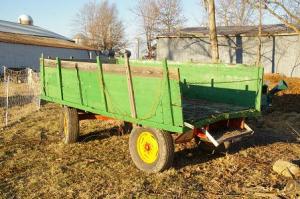 All of the sub-frame was both broken and rotten.  There were numerous attempts to cobble things back together again but even those were failing.  The running gear was sound and the tires were good.  That’s about all I had to work with.  That was enough for the money.

I used it as it was for a few months hauling brush to my wood chipper but now that hay season is upon us, I need my hay wagon.  Dad measured the wagon well and we plan to rebuild the deck just as it was originally.  That will take some doing as most of the hardware has seen better days.

Dad began the long process of disassembly a few days ago.  It would be nice to paint the frame with the bed off but the schedule just doesn’t allow. 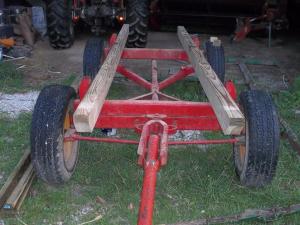 I need this wagon today.  Can we finish it in time?  I need to stop burning daylight and go drill some holes before work!  I’ll offer more details including costs in part 2.