Julie and I have been watching some online training together for several months. Around Thanksgiving we bought and watched Art Jonak’s Mastermind event. There were a couple of speakers at that event that really made an impact with me.

The first was Tom “Big Al” Schreiter who said, “You ask people if they want more money and a longer life and they universally say ‘Yes’. Then you offer to let them join your direct marketing opportunity and they say they would rather die young and poor. You have done something wrong.” Big Al is worth more attention but not today.

A later presenter was Eric Gamio. His presentation was amazing but is no longer available so I’m going to share my notes and thoughts. But my focus is on farm…and funnily enough, I direct sell everything on the farm so this is applicable. I would encourage you to find more information from Eric Gamio but you will need to understand Spanish first. I don’t.

Eric started by talking how amazingly simple it was for him to start a business. Basically, within 6 months he had to hire an assistant to take the money to the bank for him. Everything he tried worked on the first try. Eric immediately confessed that he had been lying and he was thankful for the truth. The truth was he floundered for 18 months before slowly finding his way. He said that experience was important so he could have credibility when teaching others. He could say, “I know. It happened to me too. I’m still here.”

I have worked to share the ups and downs of the farm with my audience since the beginning. I wanted a page people could read and say to themselves, “Oh. Wow. I’m not the only one.” 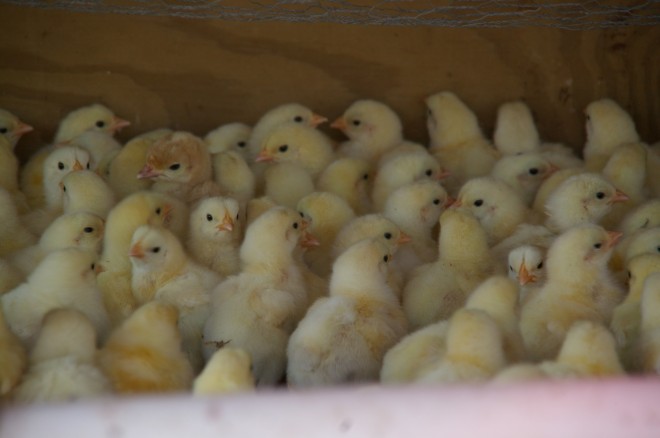 We bought our first 150 broilers 7 years ago. They came from one of the major hatcheries and slept all day with their heads in the feed trough (we later switched to a different strain of birds from a different hatchery). They had all kinds of leg issues (later, we discovered this was a lack of riboflavin in their diet) but the brooder in the back room worked fairly well (we don’t brood in the back room anymore…most of the time). Then we moved the birds to a temporary greenhouse made of PVC pipe…that we had built in a wind tunnel on the plains of Illinois. Sigh. Finally, the birds went into a chicken tractor (one chicken tractor, 100+ remaining birds) in the front yard. The front yard has never been the same since. Just as they were reaching the right size to butcher the buffalo gnats hatched and started killing the remaining birds. One evening, dad and I were in the yard, wearing bee bonnets to keep the gnats from attacking our faces and butchering birds only slightly faster than they were suffocating from the buffalo gnats. We had never really butchered chickens before and were learning under fire. But finally, it was time to sell the birds…to customers we had completely forgotten about. We forgot to find customers. Now what do we do with these stupid birds?

Does that sound remotely familiar?

Having gone through that, I could either use my internet connection to tell you about those stupid birds and their stupid leg problems or that stupid Salatin who said “You Can Farm!”

But instead I offer that story so you will be reassured that I really do know. I’ve been there. It happened to me too, and I’m still here.

There is hope for us, reader.

The first time we raised pigs I kept them behind poly net and it worked out well. The pigs cleaned up areas where I had decaying equipment, trees and brambles. The poly net kept them in check. I can’t interact with small groups of animals without referring to them as something so I named them Buddy, Girlie and Susan. Yes, Susan. That’s not directed at anyone out there, it just happened.

It came around to butcher day so we asked a knowledgeable friend to assist with Buddy and Girlie. We sold Susan (more later). After opening the polywire fence, I politely asked Girlie to follow me to the combine shed so we could shoot her in the head. She obliged. Everything went swimmingly.

Next, I asked Buddy to accompany me as well. He came out of the pen and followed me to the shed. My friend lined up to shoot as Buddy ate a cookie but…missed slightly. Buddy was hurt and went running. The goal is to finish it cleanly. And every pig since then has been clean. But with Buddy…it was not clean. Buddy had to teach me how not to kill a pig.

Have you ever had an experience like that? I know. It happened to me too, and I’m still here.

Susan the pig was absolutely pig-headed. She would not load into the livestock trailer. We tried every trick imaginable and failed miserably. Ultimately, I used a sorting board to push her into the trailer. Somehow she squirted away from me, fought her way through the electric fence and went running across the pasture. I had stressed her, put pressure on her and she responded negatively. I think she is the pig we had to rope and drag into the trailer and I not only promised my wife I wouldn’t swear like that anymore, I promised myself I would find a better way to load pigs. (We found we could open their pen to the trailer a day or so before and they would explore it and lose their fear as the new wore off).

When we got Susan to town I backed into the loading chute at the slaughter house. But I backed up a little crooked. One of the guys held up a board to close a gap between the trailer and the chute but Susan was still freaked out, saw the gap and nearly knocked the guy over on her way to freedom. Every employee at the slaughter house and the state inspector was out in the street trying to help catch a pig that had gotten loose in town.

But I know. And I’m still here.

So here we are, 8 years later. Surely I am now an expert in raising and selling chicken, pork and even beef by now, right? Surely I am making my full-time income from the farm, right?

Heck, I’ve been a parent for 16 years now. Surely my kids are perfectly well-behaved, right?

I’ve been married for 20 years. Surely, by now, I have some clue what she wants and it’s all easy, right?

I have been alive for 40 years. Surely, by now…

Look, man. I know. It happened to me too, and I’m still here.

You can make incredibly stupid mistakes but not be stupid yourself. You just have to learn. It’s Maxwell’s Law of the Process. It takes time for those hard lessons to sink in.

And it takes encouragement from mentors to continue. Relationships I treasure with people like my parents and Steve and even remote friends like Darby and Matron and many others.

Believe me. I know. I’ve been there too.

You probably have been through some difficult experiences…anything ranging from personal rejection to dead calves to pediatric oncology. While you may not want to wear them in public every day, there may be someone you know who needs to hear, “I know. It happened to me too, and I’m still here.”

Or you may be someone who needs to hear that you are not alone. You are not a freak. You have not made a mistake. It is OK if you don’t know everything on day 1. Or day 100. Believe me. I know. It happened to me. I’m still here.

One thought on “I Know. It Happened to Me Too.”