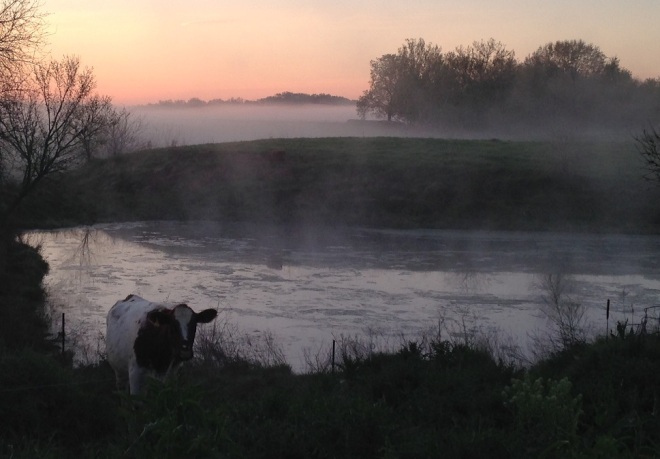 I see Mrs. White in the morning light
Not a cow pie to be seen
A kingdom of grass and forbs
And Julie is the Queen!
…
Let it grow! Let it grow!
Can’t hold the cows back anymore!

I divided our farm into 10 temporary paddocks late in March and the cows graze 3 acres of fresh grass every day. The idea is to give them the very best of the very best of the pasture without putting pressure on the grass. Right now I want grass growth, not animal density. The more grass there is the more grass there will be because, if you watch, a 6″ blade of grass will double in size faster than a 1″ blade of grass. Bigger solar collector? Different maturity? Both? Dunno. Never finished reading Voisin. But it happens.

So we move the cows quickly to keep them from munching the grass down to the dirt. 9 days later the grass is ready to rock again. 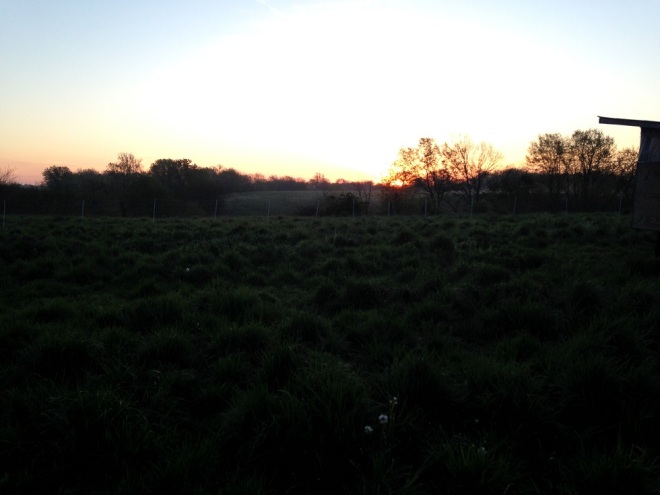 I hear your questions. “When do we move them?” “How do we know they are getting enough?” “Honey, where is my super suit?” I lack certainty concerning all three. Frozone built a case for his super suit behind the murphy bed. But the suit isn’t there. Did his wife put it somewhere else? Did Frozone simply forget to put it away? I have no idea. It’s one of the great unanswerable questions of life. The viewer is only left to assume he found it somewhere in the house and that his dinner will be served cold.

We move the cattle later in the day when sugar content in the grass is high. Usually the cows are so fat and full it’s hard to convince them to move to a new buffet. We open the fence. We call. We circle behind them and zig zag like a border collie to get them moving and hope for the best. I don’t worry about the cattle eating enough. They obviously eat enough. I worry about them leaving enough behind. I just want the cows to graze a little off of each plant, distribute manure and move on quickly.

But the time will come when I start to worry about them eating enough…eating enough of high-quality. I monitor grass regrowth during each rotation. When the starting point is ready to graze again the cows go back to the starting point. Heck with the rest of the farm. It will grow rank and dense and overly mature and will still be standing there waiting when we enter the late-summer drought. That reserve forage will buy us recovery time. The only thing is we have to reserve a different part of the farm each year. So we start in a different pasture each spring.

But there is even more involved than that oversimplified view. Right now the cows get lots of grass…cause there is lots of growth. Soon we’ll put on the brakes. Instead of covering the whole farm in 10 days we’ll cover the farm in 45 days. Or 90 days. Seasons change. In the early part of April I was worried that I had the cows out too soon and grass wasn’t growing. Now I have so much stinking grass I’m worried that I’ll never get through it all. But it won’t be long and the rain will stop. Then I’ll flip back the other way. We’ll slow the cows down. We will manage differently.

Did you know I have children? If you missed any of today’s pop culture references ask someone who has children.