It is cold. So cold we asked the hatchery not to ship our chicks to us. There is no way any of them would survive sitting outside on a post office dock in these temperatures. Not only did the hatchery agree, they ended up cancelling all of this week’s shipments.

So we drove. Miles, Iowa.

We left the house at 8:30 and dropped off three of the kids with Julie’s mom. Then we headed North. We had 6 inches of snow over the weekend and another inch overnight. The wind kicked up and made a mess of everything.

On we drove. Semis were weaving in the road as gusts of wind pushed them to the side. I brought a stack of books to read but Julie asked me to drive the whole way. 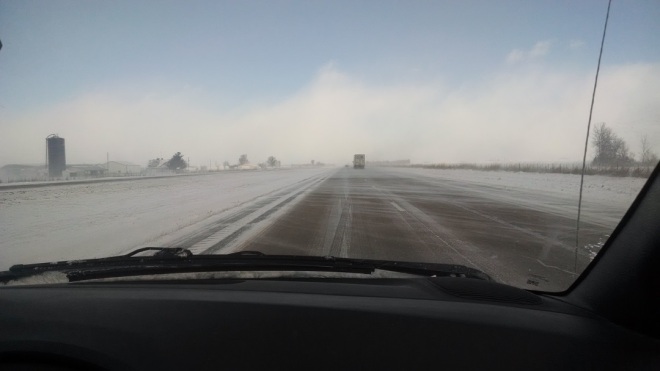 Things got better as we continued North.

Four lanes turned to two. Two gravely lanes in rolling hills, unexpected stop signs. But the Iowa roads were well maintained and clear of snow. We meandered through. It felt like we drove to Kansas then to Nebraska then back across Iowa when, suddenly, we saw it. Schlecht Hatchery! The localest hatchery I can find. 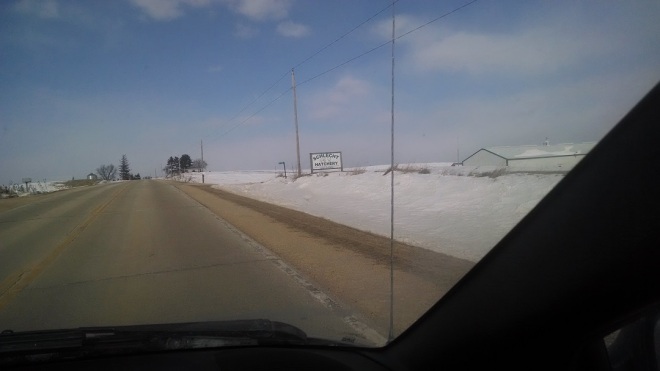 What a sight! Wow! A real building dedicated to hatching chicks, not just some crazy lady hatching birds in her living room! WHEW!

I would have loved to spend more time visiting with Etta. We have spoken to her on the phone for years and never met. She is every bit as nice as she seems on the phone. But we have to get home and that tire isn’t going to air itself back up.

Speaking of air, the car was soon filled with that wonderful new chick smell. If you don’t know what that is, get some little chicks and you soon will.

Slightly different route on the way back, rather than take the interstate we just stuck with 67 the whole way…which turned out to be a 4-lane road most of the way, meandering through small towns. Some gas stations have free air available. Some charge $0.75. That’s better than walking home and $1.25 later we were in our driveway.

We were surprised to find one of the brooder tanks was still a little cold. I’m not entirely sure what was going on. Julie and I decided to put four lamps in one brooder and put half of the chicks in there. We took the other half of the chicks home with us in their shipping crates. This way we didn’t have all of our eggs in one basket. The chicks we delivered were doing well when we left them at 7:30. They were doing well when I checked them again at 9. We give them sugar water when they first arrive to get them off to a flying start and make sure feed is at floor level in several places.

We will have to spread these chicks out in a week or two, adding a third and maybe a fourth tank to our brooder capacity. I really should just cover the floor with plywood and brood there but…well, this is where we are.

We will surely lose a few chicks. That’s just part of the deal. The long drive was awful but receiving a box of dead birds would be worse. We take a risk getting chicks this early in the year. But in normal years, they are well feathered out and ready to thrive on pasture just as things are greening up. Then they are in the freezer well before buffalo gnats emerge.

There is a little more I want to add in though. I could have stopped at an auto parts store and plugged my own tire. I had my coveralls and boots and tools with me just in case. But the wind chill was something like -30. So we tried option #2: Find a repair shop. Even armed with Google this proved impossible. On a Wednesday even. So we drove our slow leak home. I have concerns for a world that can’t maintain small, privately-owned garages in every town…or in any town.

At some point in our trip someone mistakenly said “Ohio” instead of “Iowa”. Well, I can’t let that go. We celebrated the error by listening to this song which was then stuck in my head all day. Kind of the theme song for the trip if you will. (Really just the chorus.)

One last addition. 6:52 the next morning, all chicks in the brooder are fine. By fine I mean alive, scattered about pecking and scratching, not barely hanging on, huddled under heat lamps. Now off to unpack the rest!

8 thoughts on “Iowa and Back Again. A Chick Tale.”