A reader asked for a walkthrough of a day on the farm. So I tried to keep track. This is fairly typical of a weekend. The livestock don’t take much time. On weekdays Julie has a schedule for housework, home school, business building and writing. On weekends we tackle bigger jobs.

Today was an odd day. We were up late Friday night as Julie wanted to go on a date. I don’t know why she wants to date again. We have been happily married for 17 years. Maybe there is something wrong. Something I can fix. Something I can do. She says it’s not that simple. Oh well. A night off work.

Today Julie’s phone woke us up at 4:30 alerting us that we were a mere 30 minutes away from the official start time of the day. What a stupid thing for a phone to do. I adjusted the phone’s attitude and slept for another hour to spite it.

At 5:30 I decide I can no longer excuse laying in bed all day so I pop up, brush my teeth and begin planning my day. The sun won’t come up for another hour at least and there is a pile of laundry and a small pile of dishes that need my attention. I responded to a few comments on the blog then got out the door…which is always guarded by cats. 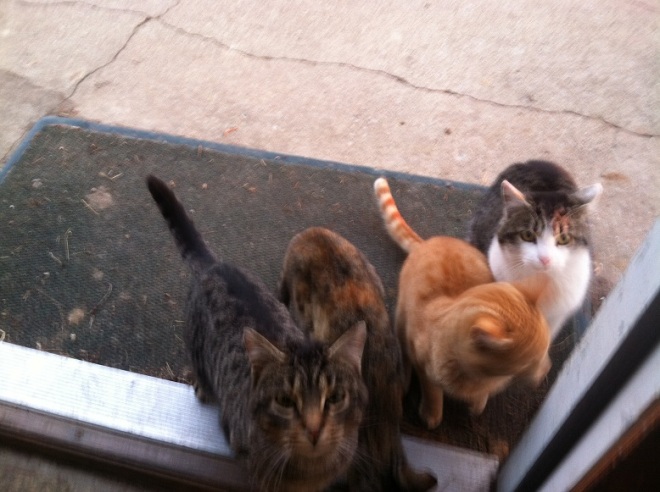 On work days I can check the pigs, feed the cows, check and water the chickens and open the nest boxes then walk to the yellow house to check and feed the broilers and return home in 15 minutes. On Saturdays I tend to stand around and enjoy the scenery a little more. It took me 45 minutes today. I dropped the bale and stood in place surrounded by cows.

That’s kind of fun but it also gives me a good chance to look them over. Good thing too. Remember that date? I get home between 6 and 6:30. By that time we only just have time to drive 30 or 40 minutes to the nearest restaurant for dinner out and still get home at a decent hour. So Julie planned out the day’s pasture and elected not to bring the cows a bale of hay. The day’s pasture is not an issue of square feet. It is an eyeballing of available forage in a given space. She didn’t give them enough to eat as evidenced by Mrs. White. 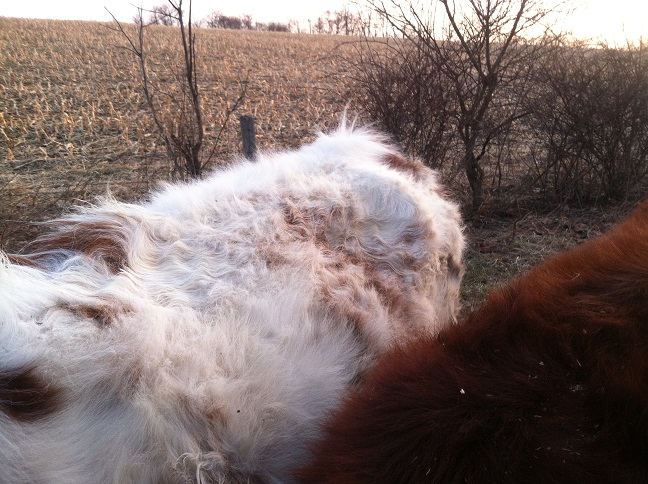 I had a chicken out of the fence and spent 5 minutes stalking her then clipped her wing. Otherwise the birds were doing their thing. Feed? Check. Water? Check. Nest boxes open? Check.

Then I sharpened a couple of chain saw chains, loaded up my equipment, hooked the trailer to the truck, straightened things up a little bit in the shop and headed in for breakfast at 8:00 on the dot. One slice of bacon, two eggs and half a cup of coffee later and I’m killing time waiting on her to go to the broilers with me. So I decide to build a race car for a Yeti. 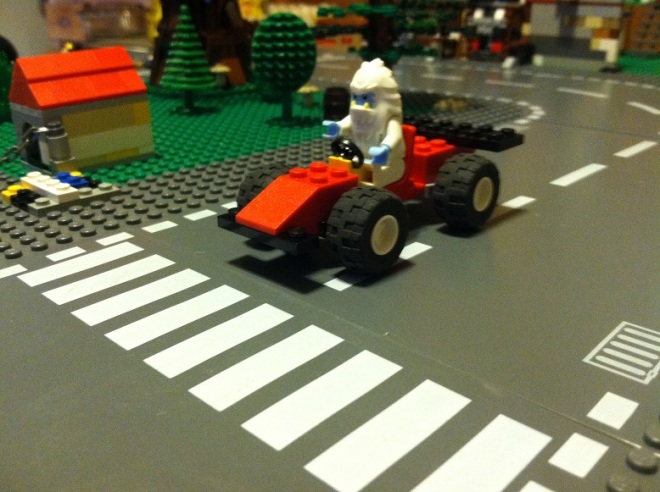 By 8:40 the broilers were moved, fed and watered (there are currently 3 tractors in the field, just snapped a picture before moving it)…

…and I kissed Julie goodbye. She was going to town to pick up the kids at her mom’s. She didn’t return until 11:00. In the meantime I dropped the trailer off at the brooder so we can haul bedding to the garden later and drove to the day’s main project, cleaning a fence row. The fence has been mostly smashed and buried by falling limbs and time but I need to at least find it. Further, I want to drop the lower tree limbs where I can, stop the trees from reaching into my field and cut out saplings that are inching into my field year by year. Again, I’m all in favor of trees, just not where I have fences. But I really can’t manage the neighbor’s side of the fence…only so much I can do. Finally, there is only so much I’m willing to do today. This is a first effort. Let’s establish a beach head. Lower limbs, nuisance species and encroaching saplings. Next year we’ll do a little more. Maybe.

There were really only three tree species in the stand: hedge, elm and hackberry. I’m happy to burn all three but I hate cutting hedge. It is the hottest-burning of our hardwoods but what a pain. Literally. Hedge is covered in thorns. The thorns on the branches cause it to stick together like velcro. When it comes loose the limbs go on the attack. There appears to be something in or on the thorns that causes additional soreness for the next few days…especially joint pain. But there’s nothing else to do. You just have to sort of carve your way into the tree then start pulling it apart. Great fire wood though. And it’s good for bow making. And it’s a cut and come again tree so if I coppice it down to a stool I’ll have a new group of thorny sprouts the next year. That must have happened to this tree some years ago.

As I cut my way through I lay firewood-sized limbs aside for later and stack the rest for chipping. It is important to lay all the butts facing the same direction to make it easier on chipper day. I’ll just set up in front of the brush piles and tie into it. I should point out I rent a 6″ chipper but it can not chew through hedge larger than 1″. Hedge is tough stuff. When I say hedge you should read Osage Orange. 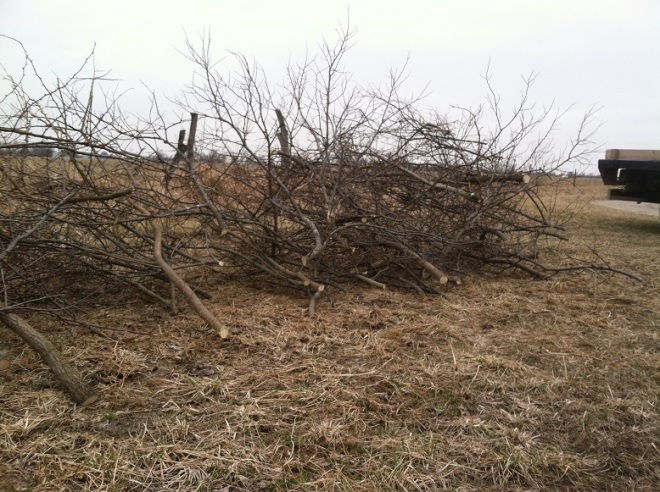 Beyond the trees there were a number of unwanted and unpleasant things growing in there. Bush honeysuckle is an invasive monster that’s hard to get rid of but poison ivy is the worst. Especially when it grows in a shrub form. Every time I cut one sawdust flies up into my face. Poison. Ivy. Sawdust.

So Julie and the kids showed up to help after 11. Julie stopped to gather eggs and check water. The oldest boy fed and checked the broilers. Then everybody helped move limbs into a neat row. We are maybe a fourth of the way down the row after three hours of work. That may be too generous. It’s obviously faster with 6 of us on the job. Well 4 of us. The youngest two mostly sat in the truck out of the cold wind. 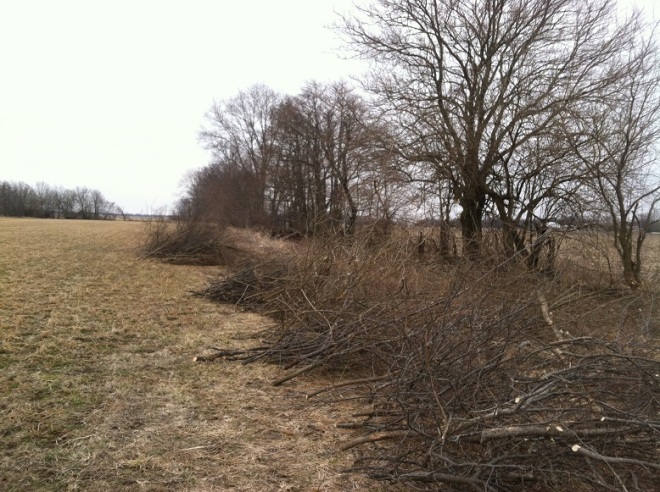 We had lunch at Aunt Marian’s house. Every year for St. Patrick’s day she serves corned beef and cabbage. For some reason we are celebrating late. Delicious anyway. I asked her about the things in her house…who they came from. I was sitting in a chair that uncle French bought 120 years ago and eating from plates that belonged to my great-grandmother and the glasses were jelly jars that uncle Pete gave her.. I think that’s pretty cool.

After lunch the oldest boy and I worked on pruning Aunt Marian’s fruit trees. Aunt Marian and I have radically differing philosophies on pruning trees. In short, she is in her 90’s. She sells her heifers and buys cows because she needs calves now, not later. Similarly, she wants me to prune for apples this season, heck with next season. Same conversations every year. I remove suckers, shoots and dead limbs. Then I start carving out interfering branches and limbs and work to open up the tree. She corrects me saying she has never removed shoots and just wants the dead and interfering branches out. But she defines interfering as just the limbs that have actually grown together. I don’t wish to disobey her. I just want to do a good job. No pictures of the fruit trees. When I removed my poison ivy-covered clothes at lunch I left my phone on the dresser and Julie was inside.

Home again around 3:30 and it’s time for some chores. 6 more layers are out of the fence so I ask the boys to grab the scissors. Then it’s off to build cow pasture, feed a bale of grass hay, do a final egg collection. The oldest boy feeds and waters one last time, we all change and it’s off to church at 4:30. At church I run the video production system. Julie and our oldest run cameras. Pretty cool stuff.

Then a little grocery shopping, head home and chill while watching an episode of Tudor Monastery Farm then it’s off to bed.

That’s pretty much how a Saturday works around here. Normal livestock chores take a few minutes here and there and we try to make progress on some major projects inside or outside. We try to find a few minutes to goof off and look for opportunities to serve. Sundays work at a different pace with a different set of specific tasks and traditions. We clean the horse stalls and clean our toilet buckets. We also have our weekly family meeting and watch star trek. Weekdays we just try to keep up…and apparently go on dates. Who knew?