We are a month into our grazing plan. In some places I am disappointed by the pasture. In other places I’m amazed. I still haven’t covered the farm but that’s good news because the starting point still hasn’t recovered. I need to encourage and allow those grasses to tiller and develop root systems to grow taller, capture more nutrients and cover bare places. I talked about this in a recent post because of the difference in forage where my chicken tractors covered the ground. 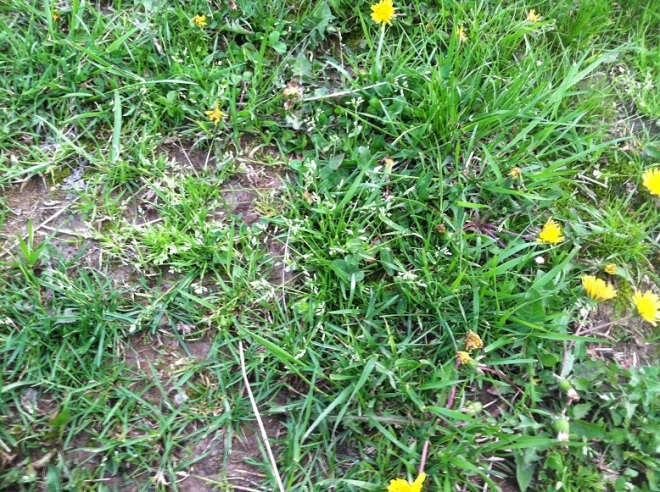 I can’t return to this pasture yet. But the good news I don’t have to because I still have a large portion of the farm that I have not grazed, not to mention field edges that I prefer to graze before we cut hay. Remember the plan for the month of April? It worked out pretty much as planned but we haven’t grazed the pasture south or east of the house. We also grazed a little here and there in unmarked areas. Things work out differently in real life. Plans becomes guidelines.

So now what? Well, now it’s time to plan for winter again. It is also calving time. I have to increase by grazing density and slow down the herd. So in the image, our house is on the left of the map next to Rockbridge Rd., not in the center of the map. There is a block by the cemetery marked with a 1 that needs to become a larger number. In fact, every marked number should be multiplied by at least 3…maybe as much as 5. We have covered the farm in 30 days. Now I need to cover the farm in 120 or more days. The cows should not return to the pasture around the cemetery until September.

Most important to me is to cover those four formerly 3-day fields far to the east before July 1. There is very little shade out there and about half of that area is south-facing. I like to have my cows near shade when summer turns hot and dry and I want to graze and stomp and manure all over that area before the rains stop. And if we multiply the grazing areas by 4 we have 48 days of grazing out there. That’s a tough row to hoe for a couple of reasons. There are places that remain ungrazed that I want to graze before I return to the start…in part because the ground needs to be managed, in part because my starting point hasn’t recovered yet. But 48 days before July 1 is May 15th.

BTW, In SQL Server that is SELECT DATEADD(d,-48,‘2014-JUL-01’). Isn’t it nice that SQL server streamlines code inside of built-in functions? You don’t want to know what it takes to calculate date in DOS.

Well, it sounds like a nice plan. I’m sure I have enough remaining pasture to delay for 10 days but will I get enough growth on my pasture in the next 10 days to allow the required density? I dunno. Maybe I can kill some time on field edges then go a little faster on that pasture. I was hoping to have the cows trample in a little warm season annual seed just to fix more biomass out there but I may not get the density to allow that. So. I don’t know.

But we have a plan. And we can afford to be flexible. I have 10 cows and 30 acres. It almost doesn’t matter what condition my pastures are in. What matters is that I work to increase stocking density now so I can increase stocking rate later.

Stay tuned. It ought to work.

2 thoughts on “30 Days Into the Grazing Season”