The pasture east of the yellow house should be some of our very best pasture. It’s up on the flat, it’s easy to access and it’s a good soil type. But it just doesn’t grow grass. What grows there is sparse and there is quite a bit of moss, especially on the north-facing slopes. I don’t mind a weedy mess but I do mind the bare spaces. And as I walk the field there are lots of bare spaces.

Seven days from now the cows are scheduled to return here for calving. That’s the plan. But the forage didn’t read the plan. Fortunately the chickens did. Where chicken tractors covered the ground there are distinct stripes of darker green and taller forage. And, yes, I spend a lot of time comparing shades of the color green.

So my theory is that the cows, over the years, have grazed this open ground in the cool of the morning then lounged and manured under the trees (mainly in the creek!) in the heat of the day…translocating the nutrients down hill (!!!) and leaving too little behind for the soil biology. One little pass with chicken manure woke the soil up in three narrow bands.

It’s a difference of 4-6 inches of forage and a massive increase in leaf area and density. But it’s not just chickens that are capable of this magic. On a whim I put a load of horse manure in the pasture shortly after the cows crossed this ground 3 weeks ago. If anything it was even more magical. 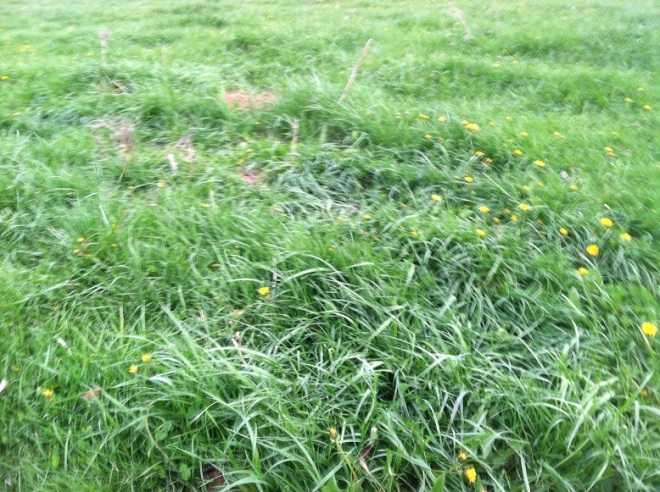 But if you need further evidence I don’t know what to say. The hills closer to our house have been grazed for the last few years by goats, chickens, pigs, turkeys and cows. I honestly can’t tell you that everything is better off for it because there are two places in particular that I didn’t manage the pigs well enough but I can tell you that you can see the difference in the variety, volume and density of forage grown over the entire season. Those grasses now wake up at least 10 days before the rest of the farm and grow fast. These grasses are a foot tall in spite of the fact they have been grazed by cattle and by the layer flock in the last 6 weeks…the layer flock that came out of the greenhouse and ate everything in sight. All this growth in spite of apparent abuse and it’s only April 30th!

So I have to get the pasture east of the yellow house on an even footing. After the cows cross that field again in a few weeks I plan to come back through with the manure spreader and a couple of loads of composted hog bedding, though I would rather apply compost in June when we begin our forage slump. I also have several loads of cow manure my tenant left in the barn…and thank God. Beyond that, I need to make my layer flock more portable so I can put them to work scratching, working and helping add fertility over a greater area. And I have to put more birds in chicken tractors. What a difference they make!

We could accomplish this feat with cattle alone but we can speed biological time by using multiple species while, also, building additional profit centers for our farm business. If there is a crash in the cattle market, pigs and chickens could carry us through. The book The Farming Ladder drives this home over and over. Mr. Henderson would add that we should raise wheat and corn(maize) to more fully diversify the farm. But, to stay on point with the post, he would seek to heavily stock the farm. The increase in sheep, pigs and chickens would allow the farm to carry more cattle. I think we have illustrated his point nicely.

2 thoughts on “Where Chickens Dare”