Eumaeus asked a series of great questions in comments for my recent post on taking pigs to market. I appreciate that. Rather than write a lengthy response in comments I thought it was better to just make a post.

You got the pigs from a farmer or at auction as weened piglets and how much per piglet?

I buy directly from my farmer friend Mike. Mike produces pork for a major upscale retail chain. He farrows on pasture and finishes in deep bedding, generating mountains of compost.

I say “friend” but really, Mike is a friend of a friend and one heck of a nice guy. I never show up unannounced but Mike always makes time to chat. Mike was the childhood friend of Steve and best man at Steve’s wedding. I met Mike through Steve. I met Steve because I buy milk from him.

I buy milk from Steve because I found out I was stealing his chicken customers (on accident), went to his house to say “sorry” and he stopped digging potatoes, loaded my car with vegetables and grape starts and forced us to eat peaches…oh, and the milk is great. True story. And Steve, like Mike, is one heck of a great guy (if you hadn’t put that together on your own). He came to AI a heifer for me once (25 minutes one-way), his wife brought us a pie and he didn’t charge me anything for the service and then he bought the resulting heifer. We send him all the milk and beef business we can. He sends us chicken customers in return. I think the account balance is strongly in his favor. I owe Steve a lot. Mike is just as giving.

Oh. Rabbit trail. Sorry. This time Mike charged me $1/pound. It changes with the market. I’m sure you can reach a similar arrangement once you locate a reliable farmer nearby. Mike doesn’t hold back his opinions about even his own pigs saying the red ones are the best eating…but we take what we can get. Hopefully your farmer will be similarly candid.

They come advertised docked with shots?

Mike doesn’t appear to advertise. Mike vaccinates for tetanus but that’s about it. I buy them castrated (my choice) but none of his pigs have their tails docked. Because of the deep bedding the pigs have plenty to do so cannibalism isn’t much of a problem. Long, wagging pig tails are very entertaining. I prefer to buy barrows (grow out faster) but I also buy a couple of gilts as some customers specifically request them. 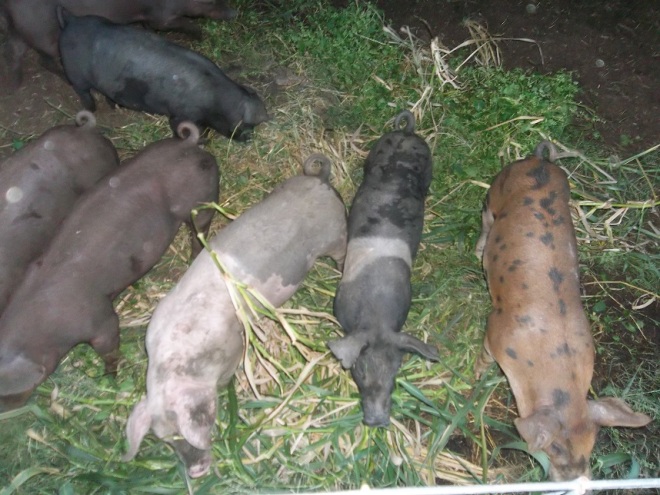 I don’t own a needle. I don’t doctor pigs, I eat them. Mike’s pigs are so healthy that I have never needed to do anything with them other than to add feed and water.

Then you took ‘em to processor and did you bring them all back home to freezers to sell as cuts or did you have mostly people pick their halves/wholes up at the processor?

I just drop the pigs off at the processor along with a list of names. This time I gave 7 buyers for the four pigs I dropped off, assigning each buyer to a specific pig (black, big red, little red and spot). The processor records the hanging weight for each animal and that tells me what I need to charge each customer. For example, I believe the spotted pig (Laverne) weighed 280 so the buyer owes me $560. Then they buyer calls the processor before Thursday (cutting day) and chooses what cuts they would like. I am not involved at this point. They choose spare ribs or country-style ribs, pork steaks or Boston butt, hams, ham steaks, ham roasts, pork chops, butterfly chops or loin, bacon or not, ground pork or sausage and how big to make the packages. It’s all up to them. They buy a whole pig they get a lot of bacon. Half a pig? Half the bacon. I usually get a chance to talk to the customer right after they call the processor. I guess it is intimidating to talk to the processor so they call to ask me questions like, “What is a pork catfish?” When they pick up their pork (week or three later) they pay the processing charges directly to the processor. I’m not involved. If I had a type 1 processor nearby I might be interested in having pork cuts in inventory as my chicken freezers are all empty this time of year. 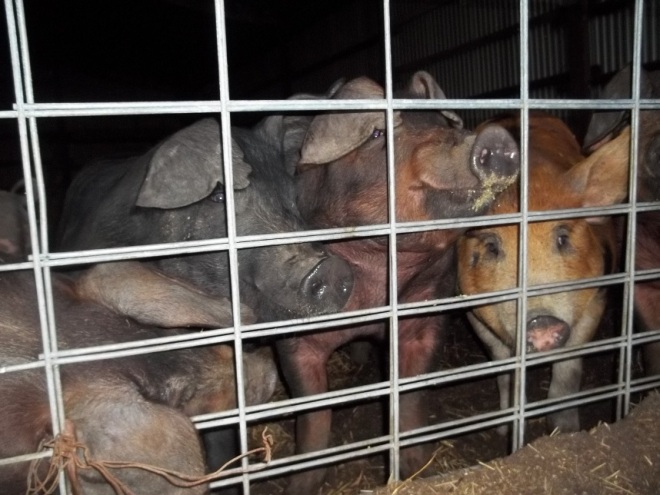 Nope. But keeping a boar for one sow is not economical and he would be bored. Keeping a boar for 8 sows would be OK. Normally, you buy a purebred boar from a known breeder and put him in with your sows. If you want to move your genetics along quickly, sell the sow after her first litter, keeping the best gilt or two. Rather than keeping or borrowing a boar for the two gilts I held back I plan to AI. Kelly Klober had quite a bit to say on this subject in a recent Acres USA issue. I haven’t read his most recent book Dirt Hog. Let me know in comments if any of you have.

I am happy to share more detail on farm activities. Sometimes I just don’t know what questions to answer. Help me know where I can be more clear.