We bought our heifers from Moore Shorthorns in Jerseyville.  They also have a grass-raised, red, slick, small-framed (4-5), young, calving ease shorthorn bull.  Try saying that three times fast.  He’s fairly light and has good conformity.  He came from another nearby farm and, more than anything, he was raised on grass.  We asked if we could use him…for a small fee. 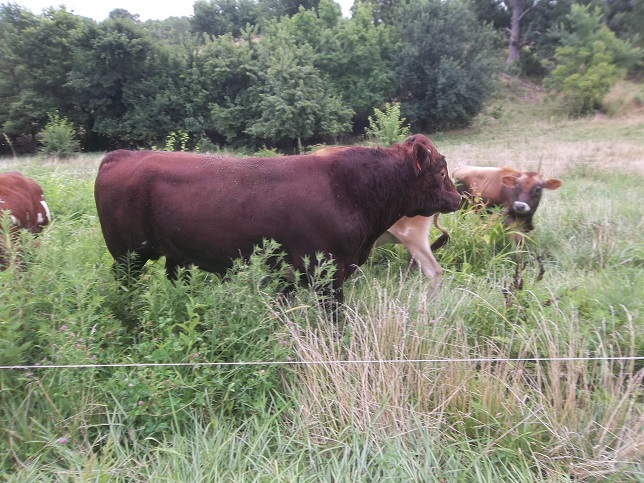 Tom delivered him Monday afternoon and he instantly detected that Flora was ready for service.  We had no idea.  No sooner was he unloaded than he was hard at work.  Well, here’s to hoping for a Shorthorn/Jersey cross.  Hope we get a bull calf….mmmmm…steak.

His disposition is good.  He doesn’t seem to mind us being around but we are still mindful of him.  He’s so busy chasing girls he doesn’t seem to notice us but we still keep an eye on him.  6 weeks from now he’ll go home and we’ll be back to our normal routine.  We’ll also get our two new additions at that time.  This little heifer:

Both are small heifers compared to the rest of their graduating class, weighing 450 pounds at weaning.  I expect them to be 4 or 5 frame cows.  Tom had a giant shorthorn heifer that just won grand champion at the Madison county fair and will probably win again.  She was at least a 7 or 8 frame heifer and she’s due to calve in September.  I let him know I’ll soak up the smaller calves he produces…all high quality animals, just smaller-framed (In a grass operation, a cow has to eat a percentage of its weight.  That’s obviously easier if they are smaller.).  Tom’s show calves tend to be sold or selected the day they are born so I don’t even see them.  Really, Tom picked these two out for me ahead of time knowing what I’m looking for.

Hopefully this bull will throw small calves and, hopefully, the calves will be pre-adapted to performance on my pastures.  A few generations from now I should have just the cow we need.  Weather red, white or roan….she just has to be small.  Truth be told, I’m partial to red.

2 thoughts on “A Fair Amount of Bull”