The fescue is tall but the other grasses have a lot of growing ahead of them before I can graze them again.

Maybe this is a better picture.  The cows ate whatever this was right down to the ground.  That’s my fault, not the cow’s fault.

We grazed across the remaining bottom ground South of the branch then crossed the branch and grazed it out.  You can see the line where we put electric fence 2-3′ inside of the perimeter fence.  I really didn’t want my cousin’s Angus bull to get any opportunity with my Shorthorns.

Also notice the abundance of honey locust trees.  I’ll be busy next winter.

Cows grazed the best out of this, trampled quite a bit but we still didn’t have enough pressure on the land.  Too much fescue was left standing.  But there was a section in the middle that got missed in the grazing rotation.  The diversity of species there is amazing and shows where the above picture started.  A good stand of red clover and a mix of weeds including goldenrod, burdock and multi-flora rose but there was a total lack of chicory and dandelion.  Maybe because it’s wet, sandy bottom ground.  Who knows.

Notice none of the fescue heads were nibbled off.  Yup.  We messed up.  Oh well, we’ll trample it hard when we come through again in June.

The next area was grazed a little over two weeks ago.  Portions of it are recovering well, other portions are totally dominated by white clover and the recovery is slow.

Back to the South the bottom ground is recovering well.  A fair portion of the growing green stuff is goldenrod but this has been a weedy mess for years.  Two years ago (maybe three?) the 6 of us spent an evening with a tractor pulling hundreds of saplings our of the bottom then I mowed it (I mowed because I didn’t have cows).  Now I’m hoping to continue improving the stand by way of cows.  Check in again in a couple of years to see.

The stand is recovering well but there are a lot of hoof prints.  We got more than a foot of rain toward the end of April, several more inches at the beginning of May.  I would guess we have had 16-20″ of rain in the last 6 weeks.  Anyway, hoofprints…

Follow this link to see the flood water standing in the bottom.  This is the same area (side view) today (…well, Sunday).

Up the hill, my fallen tree is getting lost in the grass.  I thought the grass was tall last time we grazed here.  I have never seen this much grass here before and am anxious to see what it looks like in another month when the cows return to it. 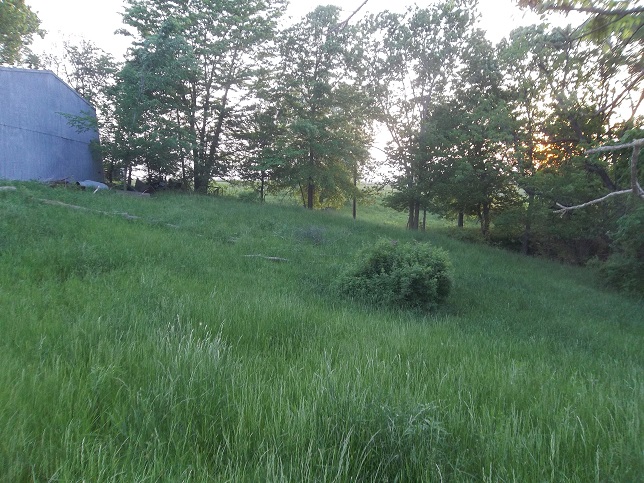 Now we have made the loop and we’re back to the cows.  They have nothing to say to me and are clearly unafraid.  None of them want to snuggle with me but the dairy cows are nearly pets.  The others know I’m the guy who can move the fence forward, I mean nothing else to them.  Look carefully at the picture and you can see the next division we’ll open up the next morning.  Two fences behind the cows.  We just roll those two cross fences backwards then push the water and the back fence forwards leaving 2-3 days of grazing area under the cows at any given time.

A little further South, looking South I can see the few acres I have set aside for drought.  By my measurements I am actively grazing less than 10 acres with 8 heifers and two calves.  I have 4 acres set aside as a reserve along with odd patches of hilly, wooded areas I don’t care to pasture heavily.  Add to that 3 or 4 acres of alfalfa (well, mostly alfalfa….well, mostly alfalfa and orchardgrass…well, mostly alfalfa and orchardgrass and a few bare spots where the chickens killed the plants standing in mud during days of heavy rainstorms) that we’ll use for hay.  I hope to graze this pretty hard starting in July and again in November or December.  The plan is to set aside a portion of the farm each year for stockpile.  This gives my main pastures additional recovery time just when they need it and builds standing forage for winter grazing.  I’m not exactly making this up as I go along but I am playing by ear.  Stay with me as I learn.  Anyway, straight ahead of the brush pile is an old bridge.  The stream flows from right to left under the bridge.  Everything across is set aside for July.

Now moving West we come to the place the pigs were in March.  It’s hard to hurt fescue…

…but there are some spots where the pigs managed to set it back.  Those spots are dominated by chicory and dandelion.  I’ll need to work to get more clover growing here going forward.  There is always more to do. 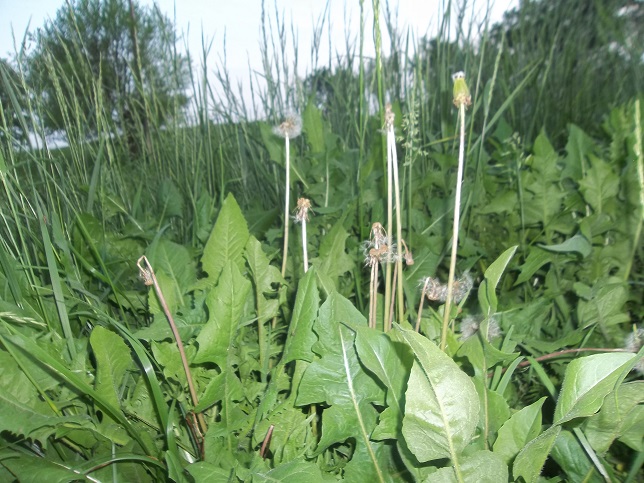 We’ll just have to wait and see what the cows eat here in a few weeks.  Hopefully it’s not too stale.  I may follow Gabe Brown’s advice and sew in cowpeas, sunflowers and millet as the cows stomp through, then winter annuals when they go through again in the fall.  Who knows.  Again, playing by ear here.

In spite of my best efforts to build big grazing areas early and cover the farm quickly I fell behind.  It all got away from me.  Now I’m slowing down a little, trampling more grass with narrow grazing strips and just hanging on.  The plan is to double our herd size next year as our farm triples in size.  Yeah, I know…but you have to work within your budget.

How is your grass growing?

4 thoughts on “Strolling Through the Pasture May 2013”