I was asked recently how I feed the pigs…or what I feed the pigs in since round pig feeders are not exactly cheap.  It isn’t a question I had given much thought to as we just solved the problem and moved on.  Our primary motivation is keeping the soil healthy.  After that we work to keep the animals healthy.  Within those constraints we work to find the best combination of durable, local, inexpensive/free and suitable.

If you give your pigs free access to eat throughout the day they will, unsurprisingly, gain weight faster and put on more fat.  If you feed them twice per day they tend to be leaner.  Many, if not most, farmers provide enough feed to last several days and go do other things.  We keep our pigs near our chickens and feed them when we open and close the hen house each day.  We give them roughly 3% of their bodyweight each day of the Fertrell grower ration as well as a little garden waste, some apple drops, acorns or whatever else is handy.  Really, we want them all to be satisfied and have a little feed left in the trough for a snack later.  This would be unrealistic if we were raising more than a few pigs as 4,000 pounds of pork need to eat 120 pounds of feed each day and I doubt my dainty wife is going to lug feed out to the pasture in that volume.

I took some slab oak lumber from my sawmill to the tablesaw and built a durable feed trough.  It works well for 8 small pigs or 4 larger pigs but, again, forces us to put eyes on our pigs twice daily.

We water them with a nipple on a garden hose.  It’s not exactly ideal having  three lengths of garden hose stretched across the pasture but it certainly has a light footprint and is easy to install.  It was also fairly cheap.  There is some concern about the pigs having access to cool water so, on hot days, we disconnect the hose and spray the hogs or their wallow to cool off the water again.  Honestly, I haven’t noticed that the pigs care.

The nipple is on a 3/4″ galvanized pipe.  Actually, it’s 2 pipes and2 elbows.  I use hose clamps to keep the pipe on an old, broken t-post with an elbow pointing over the perimeter fence.  The hose clamps allow us to raise the nipple as the pigs grow.  It’s pretty easy to move when we move the pigs.

Check your hog water several times daily in case the nipple clogs, the hose gets pinched, someone disconnects the water, etc.

Also, be sure to move the hose before you take the mower out to clip the thistle.  I really thought it was 10 feet over!  What a day Saturday was. 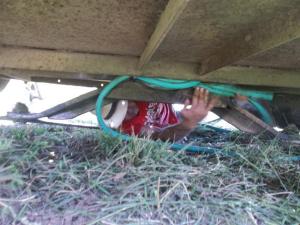