If you are looking to expand your vocabulary look no further than pig ownership.  A pig is a 120 pound ball of muscle complete with teeth and fully equipped to outsmart your every effort to muscle them into making the right decision.  In this particular adventure I did not teach my wife or children or neighbors within a half mile any new words.  Everybody stayed calm…this time.  I’m going to skip to the end then tell you from the beginning.  We have learned to modify our schedule and to allow the livestock to dictate the pace.  Yes, I wanted to wrap up the pasture change in 5 minutes but it took almost two days.  It happened on the pigs’ schedule.

When our pigs see us they come running to the fence hoping for a tasty treat.  All of their experiences with us have been positive (well, except maybe the castration) and we give them food to reinforce the lesson.  If a pig is uncomfortable, no amount of yelling or abuse will make them more comfortable.  You just have to wait it out.  Patience and kindness.  Just moving to a new location is stressful for the pigs.  I can only compound that stress by changing from the nice food guy to the mean guy with a stick.  I have to tell you though, as I was standing in the rain Sunday morning I was wishing I had a tranquilizer dart for each pig so I could just carry them to their new pen.  Ultimately, patience proved easier by far.

The pigs were still in the winter sacrifice area on pasture and, since their initial (well, secondary) introduction to electric fence, hadn’t gone anywhere.  The pigs know that the white wires hurt but they also seem to think there is some sort of voodoo concerning the ground where a white wire once was.  As before, we made a corridor of fencing, initially with two strands of polywire, later with Pig Quikfence.  Saturday morning I opened the fencing from their pasture into the corridor then began moving their pallet and straw bale house to the new location 250 yards away.  The pigs stood their ground.  No amount of scrambled eggs or chicken broth could convince them to budge.

Hours pass.  The pigs aren’t having any of it.  They will not cross the line.  At 3:30 I decide to crowd them into the corridor by squeezing their electric fence toward them a little at a time.  Everything was going great until the black pig decided his fear of the unknown was greater than his fear of the fence and he attempted to break through the fencing and escape.  It was a shocking experience for both of us.  I don’t have to remind you that pigs are distinctly lacking in handles so I found myself wrapped in a tangling mass of electric fence and pork…until we pulled enough of the fence that it came unplugged.  Fortunately I had an insurance policy in place…a length of PermaNet surrounding their pen just in case.  The little black pig backed his way out of his fence and neither of us were worse for the wear.  The fence was not broken, just pulled from its posts and I learned my lesson.  Patience.  We closed things up for the night and headed off to church vowing to return in the morning.  Maybe tomorrow hunger will override fear.

After milking on Sunday I turned the cows out and set up the corridor again.  The pigs were not interested.  I put down a trail of feed hoping they would follow along.  They would come up to a certain point.  Then they ran back to their pile of straw on the ground.  Well, I have other things to do with my time.  They can’t escape the corridor so I’ll just check on them from time to time.

Around 11:00 I was sent out to the pigs with a bucket of scraps.  I placed these scraps deep in the corridor and upwind of the pigs.  The red pig (cleverly named “Red”) decided they smelled so delicious he had to get some of that.  Spot and Blackie (names just happen with small numbers of livestock) stayed back with a “not fair!” look on their face.  Again I walked away.  At 11:45 the kids called to me, “Dad!  The pigs are in the corridor!”  That’s what I was waiting for.  I headed out with a bucket full of feed and, like following the pied piper, the pigs were close at my heels all the way to their new home. 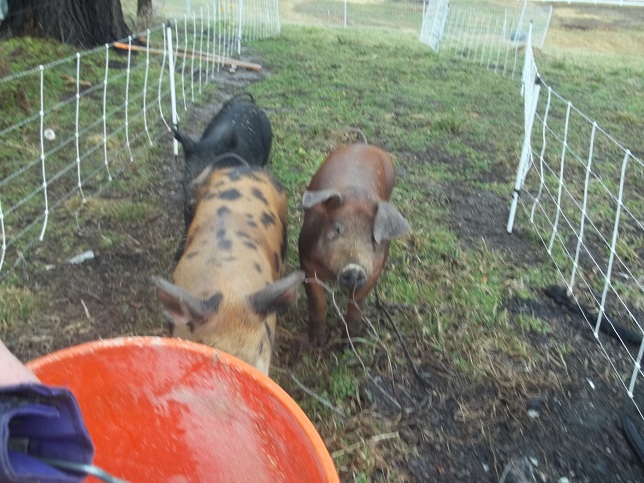 Nobody was upset.  Nobody was abusive.  No frustration, crying, swearing off pigs forever or talks with the children about types of language that are acceptable around the house and how sorry daddy is and daddy promises to do better next time then daddy sneaks off to down a highball.  Nope.  Just pigs following that nice guy who brings them food and a new, fresh pasture full of greens on a South-facing slope.

They will get to be here for a few days then we’ll move on to the next pasture.  It’s all about disturbance and rest.

I need the pigs to work for me.  It’s not enough that they get fat and taste great.  They have a job to do.  But MY job is to help them do their work.  My job is to make them happy in their work.  I see these animals several times every day.  My pigs don’t cower in fear at my approach.  They greet me, they grunt at me, they run and skip as I approach (really).  Happy pigs.  Happy pigs are easy to move.  Happy pigs are easy to load.  Happy pigs taste better.  There is enough stress on livestock.  I don’t have to add to it.  I can spend two days waiting on pigs to move themselves.  It will be even easier next time.