Each year we pick up a few bags of apple drops at aunt Marian’s house to help her keep her yard clean. Apparently we have just taken a small portion of the available apples. This year we filled a full pickup truck from one tree. And that was just the start of the drop. So when you wonder to yourself, “How many apple trees do I need?” remember she has three mature apple trees in her yard and it makes this point well: You don’t need a big orchard.

Her Mutsu tree is her prized possession. This is the tree I prune when she isn’t looking. I can usually prune about a quarter of the tree before she gets her slippers on and tells me I have cut too much wood off of the tree. Mainly I try to keep the chimney empty, remove lower and crossing branches and cut out anything dead. The tree is also reaching over to her grape vines so I have been working to shorten its reach over time. She just wants me to remove anything that is touching. So I play this little game. I express my love by pruning her trees. She expresses her love by not staying angry with me.

The Mutsu ripens later in the season. This summer has been cool and the apples are already sweet if you can stumble through the drops to pick one from the tree. 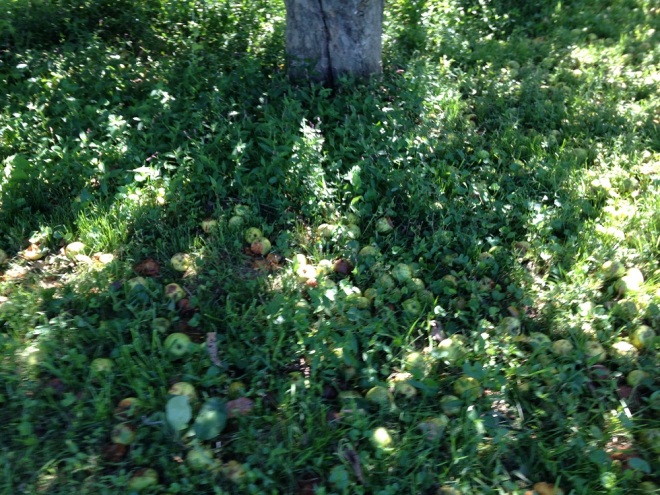 The tree by the house is an unknown. She ordered a number of trees through the mail some decades ago and didn’t get what she ordered. I think this is one of the wrong trees but it makes a HUGE quantity of sweet red apples every year and seems to be resistant to fire blight.

When she had her roof replaced the roofers took certain liberties with the limbs overhanging the roof. Since I always start with the Mutsu tree, aunt Marian was out there with me and prevented me from doing anything other than cutting out a specific broken limb. The long limb on the left offers additional shade in her dog pen. You should see all the apples in there! Since the limb points down it focuses on apple production. Go read up on training vs. pruning trees.

Finally there is a Johnny Appleseed tree in the corner of her yard. This tree grew out of a compost pile. It makes a mild transparent-type apple but she rarely uses the apples. It has never been pruned short of when she asked me to cut out dead wood last winter. She was surprised and disappointed how much dead wood was in the tree. I think the tree is just about finished. I may gather a cutting or two. Most of the drops from this tree feed the wildlife that venture into the corner of the yard far away from the dog.

I don’t think I’m exaggerating to suggest that I could fill five or six pickup trucks with this year’s apple crop from these three trees…even just the drops.

The four pigs and layer flock, it turns out, are only so interested in eating apples. They can have enough. I don’t know what aunt Marian did with them all. We have considered unloading them in rows in the pasture allowing trees to sprout where we think we would like to have them…but who knows. It is important to pick up the drops to keep the apple pest populations lower. We just haven’t really solved the problem yet. And there are more apples rotting on the ground as I type. Ugh. And buckets of apples in my kitchen waiting to become applesauce.

You might consider planting four smaller trees together in a cluster and work to keep them small. This would give you a manageable amount of apples from a variety of flavors spread across a longer harvest. Dad found a roadside apple tree between here and aunt Marian’s house. Just a volunteer tree but loaded with red, knotty, wormy apples. No sign of fire blight though and a good flavor, though they are not quite sweet yet and it is growing and producing in spite of the fact that it has never been cared for in any way. I should get some cuttings of that too… 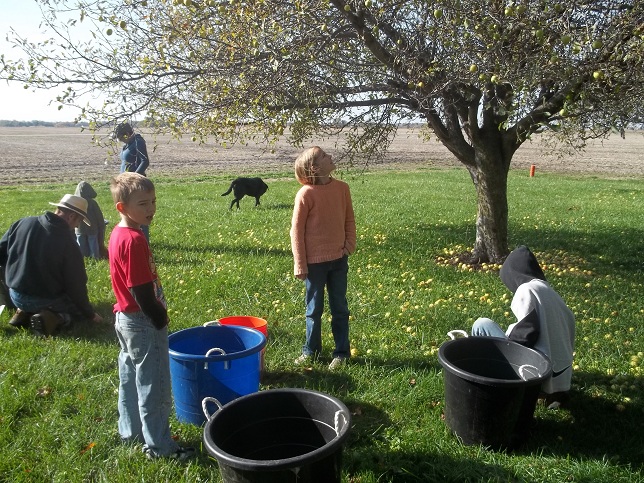 We had two hours between morning chores and lunch for three adults and six children (sister and nephews were visiting) to pick up the apples.  It was just enough time to clean up under one tree.

That one tree gave us five large tubs of apples and six feed sacks full of spoiled apples for the pigs and still left several bushels hanging from the tree. 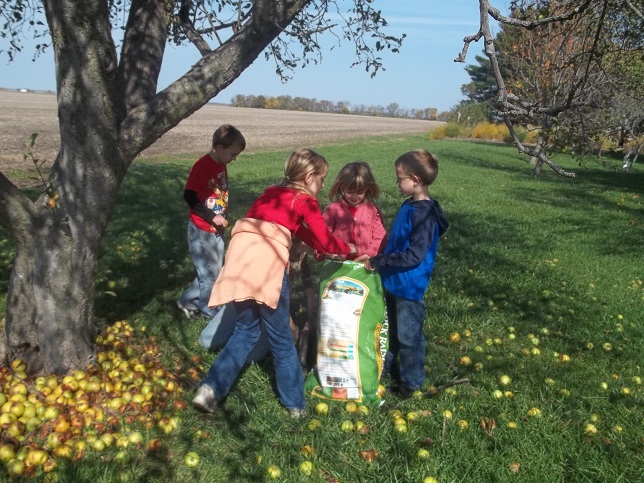 Lunch was at my mother’s followed by a birthday party for our oldest son at our house.  Then we began cooking the first batch of applesauce.  Not time to loaf.  We work in this army.  We’ll be cooking apples for days.

Let’s start with the apples.  Wife took the kids to pick up apples at Aunt Marion’s house (sometimes the kids get confused and call her grandma aunt marion or even Maid Marion…lol). 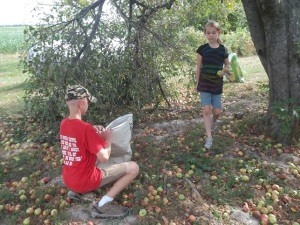 They filled three bags, barely making a dent in the supply.  Aunt Marion filled two buckets with apples that were good enough for applesauce.  Please notice the top of the tree broken and laying on the ground.  Yup.  She didn’t let me prune that tree.  Maybe this winter…

It rained and rained and rained.  Four and a half inches in 2 hours!  The pond filled up and there were even puddles in the driveway!  But nothing comes without a cost.  It cost us our computer and our phones.  Lightning struck the phone line outside of our home somewhere and our DSL modem sparked inside the house.  Though the hardware checks out I can’t get the PC to boot.  I’d say that’s a fair trade for a full pond.  Oh, and the roof leaks!  Isn’t it wonderful?!?!?  Merry Christmas Mr. Potter!

My hogs weigh in around 150 pounds now.  They are slower in growing out than their floor-raised counterparts for a number of reasons.  First, though they eat roughly the same amount, they don’t have access to food all day long.  Because they don’t have access to a snack any time they want they tend to be a bit leaner than they would otherwise be.  Also, they have room to run, exercise, fight and play which, not surprisingly, results in a leaner animal.  Finally, my pigs are expected to work for a living.  They aren’t laying on slatted concrete relaxing in the shade, inches away from feed and water.  They are out on the sun-baked pasture.  There are goodies buried in the brick-like soil and they work to find them.  After they work the soil I plant a few seeds.  They are happy with the work they accomplish.  They are happy to live life in the sun with a chance to fully discover the purpose of their design…well, not the reproductive parts.  My customers are happy because I deliver a lean, healthy, happy and, consequently, tasty animal to the locker.

Let’s make it even better.  Right now immature apples are falling from the apple trees at Aunt Marion’s house.  It is important to remove the drops from the orchard to control the pest population and limit disease vectors in the orchard.  The kids and I pick up a few bags full of apples each evening.  Later this week they’ll work with Aunt Marion (who recently celebrated her 94th birthday) to sift the good from the bad under the early ripening apple trees.  For now we just harvest from under the mutsu apple tree.

The pigs get a 5-gallon bucket of unsorted apples each evening for dinner which is the same as saying they get unlimited access to apples.  They really make pigs of themselves.  This will add flavor to the finished product giving a lean, healthy, flavorful pig you just can’t buy anywhere.  By the way, we’re sold out of fall pork.