Four years ago a friend of a friend bought three silver-laced Wyandottes at a store in Alton to make his granddaughter happy. She was, indeed, happy. But the subdivision rules said “no”.

With promises to do our level best to protect and love those chickens, the grandfather brought them to our farm. His face showed regret mixed with relief.

Dot and her two sisters did not fit in well with the flock. They were smaller than the other pullets and that comes at a cost. They were not allowed to roost at night and slept next to the chicken house.

Two of the three were murdered in the middle of the night by an evil, stinking, thieving skunk. We slept in the field for a week trying to bring that monster to justice. We failed. But the kids had fun. Grandpa and grandma and the kids slept in a tent next to the pond. I patrolled on foot or slept next to the chicken tractor. I guess it sounds romantic but it was miserable in real life.

The skunk problem may have been solved for us by way of owl. Or car. I don’t know. But the murder of our chickens abated…briefly.

Dot eventually became a part of the flock. The only black and white bird in a sea of red. How could we avoid naming her? 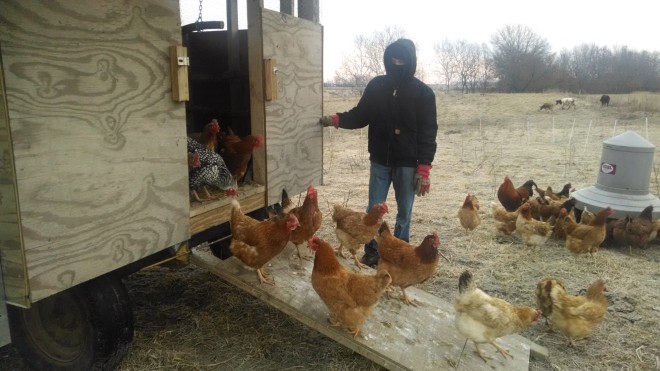 Dot died earlier this week after a big storm passed. I went out to close up the birds after moving the cows and noticed her laying still, taking shallow breaths under the nest boxes, unable or unwilling to open her eyes.

I have some idea what was wrong with Dot. Mostly I suspect she was old. There is nothing I can do to prevent old. I believe her heart had failed her in some way, though her comb was not yet blue.

So it was time for Dot to do what Dot should have done a long time ago. We should not own 4 year old hens.

Dot lived with a purpose. She is not a pet. She is a farm animal. She existed because she was productive. When she is no longer productive she moves on to the next job. The last job. Two gallons of beautiful, amber broth.

I left Dot sitting on a jacket in a cardboard box while Julie boiled scald water. This box was last used to comfort a dying cat at Christmas. The cat was a pet. We buried it. Dot is not a pet. Dot is food.

It only takes a minute to dress out a hen. We let her soak, maybe with a dash of salt, then she stewed overnight with a few onions.

There are three details I would like to add in here. First, she had a heart attack as evidenced by what I found inside of her. Second, she was in otherwise excellent health and, even at her age, was still actively laying. Third, we would never even consider selling a sick bird. We keep them for ourselves. Heart attack birds taste a little off.

I would rather she had lived. I liked Dot. But this is what needs to be done.

The pasture feels a little empty without her.

2 thoughts on “When Life Hands You Chickens, You Make…”