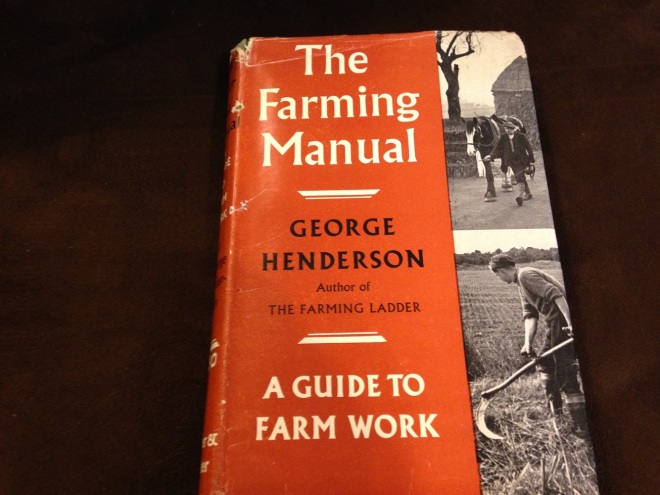 Some years ago when I thought I was an athlete I made a day trip to Kansas City to visit Coach Rutt. Coach had several programs that utilized bodyweight and, otherwise, minimal equipment: pull-up bar, rings and sand. The “Rutman mile” was popular in CrossFit circles for a while (10 years ago) and it was simply this: Carry your bodyweight in sand for a mile in under 15 minutes.

In this chapter Henderson discusses the capability of the human body, its often untapped potential and ways we limit our capacity by lack of training. What is possible?

…the very experienced stacker [of wheat sacks] …can carry at least three times his own weight without difficulty. The world record is 1 ton 18 cwt.

In the old days, the carrying of a sack of wheat up the granary stairs was the qualifying task by which a youth was entitled to consider himself a man.

Well, let’s see…39 years old, 175 pounds and can’t imagine carrying the equivalent of 5 feed sacks at once…not a man by that measure.

I struggled to carry a single hundredweight in my first week on the farm. I studied those who could, and within twelve months my master would set me to carry all the grain from the threshing machine in the standard four-bushel sacks, and which in the case of beans, peas or vetches would be 19 stone – in those days approaching two and a half times my own weight.

Most of the athletes who journaled their attempts at the Rutman mile (Kelly Moore comes to mind) found it almost impossible to lift the sandbag from the ground. Henderson suggests it is better if you receive the bag from a starting position around shoulder-height.

Think of an athlete preparing to perform a squat. Head up. Chest out. Core muscles tightened. Squeeze your cheeks. You lift the bar with your shoulders. These are things you will remember hearing from your coach. “Knees shoulder width.” Your coach will explain the physical motion and will correct your motion to prevent injury as you train for higher weight.

It is sometimes necessary to take a sack from a height from which it is not possible to take it across the shoulders, and in which case it must be carried down the back, and can be done in perfect safety providing the knees are close together and the stomach muscles are contracted before taking the weight. To have the legs wide apart and the body muscles slack is to court an injury either to the back or stomach.

Notice his emphasis on the core. Keep your back and stomach tight throughout the motion. Henderson is writing this chapter to train farm athletes. I have joked about CrossFarm many times. This is why. Farming for a high level of output is an athletic endeavor. Every morning is a foot race to feed, water and add bedding. Then there are other chores. Put up hay in time to shower and go to a social gathering, slaughter 300 chickens before customers arrive. Cut, split and stack that tree before the next storm arrives. These are very much similar to CrossFit’s idea of timed workouts. How much work can you perform safely in a given period of time? But instead of making metal go up and down we are making cows happy, customers happy or keeping the wood stove going.

But it all hinges on safety and technique…not just strength or size or weight.

Let me introduce you to my lovely bride. She is not 39. She is 5’9″ and weighs significantly less than me. She couldn’t deadlift 300 pounds to save her life. She irritates an injury in her right shoulder if she even thinks about carrying a single feed sack or a half-filled bucket of water.

What is the difference between Julie and me? When dealing with a 50 pound sack our weight, height and age difference don’t enter the equation. Julie carries it incorrectly.

You may have balked when I said that but let me suggest you think again. Julie is under more muscular strain carrying a basket of wet towels to the clothesline than when she carries a feed sack on her shoulder. It’s not weight. It’s technique. Normally she carries the basket in front of her body, pushing her center of balance way out in front, leaning back to compensate. And you should weigh a basket of wet towels sometime. You might be surprised what you are doing to your back.

Julie carries a feed sack on her right shoulder. Every time. She leans way to her left. Every time.

I either carry a sack on each shoulder or I alternate the shoulder I carry the sack on.

But Henderson says this is incorrect. I should center the sack across both shoulders. Maybe that’s a way I can help Julie.

And I need to help Julie. I need to coach Julie and our children…training them to be farming athletes. And if you are concerned that Julie can’t keep up with me physically:

Manure loading is considered to be one of the heaviest jobs in farm work, but with a little study it is no more than a physical effort which can be enjoyed. During the war, farmers were warned that they should not expect land girls to load manure. With suitable training a woman can compete quite easily with a man of similar weight. Intelligent application, as any woman can demonstrate, can compete with brute force in nearly all farm work.

This is a chapter on coaching. Coaching body mechanics, coaching technique and coaching tool selection (shovels shovel, spades dig). Work can be fun. It is always work but it should never hurt. If you are hurt, focus on healing and while you heal up, try to analyze what caused your injury. Are you lifting or carrying incorrectly? Are you using the wrong tool? Do you sit with bad posture at your desk job for hours on end?

I have some room for improvement. How about you?

4 thoughts on “The Farming Manual: The Mechanics of Labor”