We had a wet summer. Don’t look a gift horse in the mouth and certainly don’t complain about rain in the summer…but Geez! We were two months late getting first cutting hay out. The alfalfa was all stemmy and went to seed.

We didn’t cut until July. Even then it got rolled it up wet. It must have rained every three days…not a way to cure hay. You reach a point where the future hay is negatively impacted by not cutting the old stuff. We were there. We had to get that stuff out so we could grow better next time. So my cousin cut and took his share.

30 bales of stems that were fat and woody and had fallen over onto the ground with new growth coming out of them. Awful stuff. Not a single bale I can feed to a cow out of the first cutting. But at least it didn’t burn up. I saw these at a friend’s house recently. He’s lucky it didn’t catch fire. Some years ago my cousin had sudangrass where he later planted the alfalfa field. There are still three or four black bales at the south edge of my property entirely blackened. It happens. 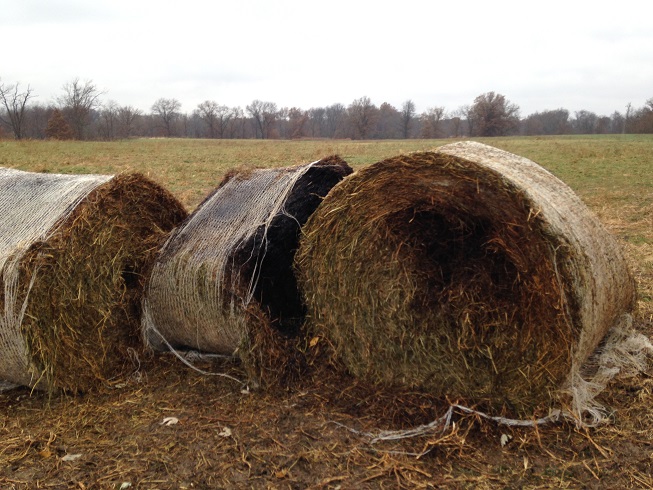 What in there would catch fire you ask? Well, you have a wet mass of organic material. Biology begins to work. Life creates warmth. Respiration. Reproduction. Growth. Waste. Cellular Mitosis. The bale in this case is little more than a big compost pile wrapped in plastic netting. That can burn. So can a compost pile. So can a pile of wood chips.

Half of my bales are only good for compost. So that’s what we’ll do with them. I’ll gather up the feedlot manure and make a lasagna with alfalfa hay and feedlot and bedding. Then we’ll spread that on the fields. The alfalfa all went to seed so that will be nice.

The other half of my bales? Well…not so good. But not so bad. I just have to play it by ear and let the cows make bedding out of the bad stuff. Or let the chickens scratch through it. Sometimes the center of the bale is moldy but usually it’s just the outer 6-8″. I stand the bale on end and peel off the outer layers. See this smoke?

That’s not smoke. It’s mold spore. That first 30 bales I was talking about earlier all sprouted mushrooms last summer.

Compost is the only solution. I can’t even use it for pig bedding as it would make them sick.

It’s hard to put up a good round bale in wet weather. Most of our small square bales are excellent though…this year anyway. Squares are easier to evaluate. You know what they should weigh as you lift them by hand. You can dig into the pile and feel for warmth or moisture or you can tear a bale apart and inspect it easily and you can move it by hand. It’s hard to move a round bale by hand. Even just the center of one.

At this point I’m tending to unroll a bale down the hill and just let the cows pick through it, making bedding of what they don’t want. Dad and I have some concerns about how long a thick mat of hay will persist on the ground but we’ll just have to play it by ear. Hopefully the chickens can scratch it out and the worms will decompose it.

I don’t have any advice here. More than half of my hay is worthless. It’s hard to put up good hay, especially early in the season. I would prefer to just buy it in but hay quality is a concern there too. Maybe dad will weigh in with some ideas for how to ensure hay quality. Hopefully dad and I will have a better hay year in 2015, but still moist.