Our cows must think we are room service. They didn’t even get up yesterday when Julie added a bale of straw. Things are pretty comfy in the barn. Air can blow through as the building is not tight but the wind is slowed considerably. That’s a good thing for getting rid of ammonia but the better way to deal with ammonia is to capture it in carbon. Further, the deep bedding, once it builds mass, becomes a living, composting entity of its own. We started with the sawdust. 6 buckets of oak sawdust.

I spread that evenly over about half of the barn. Why only half? Because the barn is huge and the herd is small. We used corral panels later to cut the cows off from the rest of the building. I could either bed the whole thing or have my bedding twice as deep. We topped off the sawdust with four square bales of straw. Each day we add a bale of straw, more if needed.

It is interesting how quickly that first layer of bedding gets soiled or otherwise worked into the barn floor. We add bedding every day for several days until, finally, we seem to reach some critical mass and the bedding needs taper off considerably. The calves are at that point now except in front of their feeder. That sees such heavy traffic there is no hope for it. If the cows stay here for long the bedding will build up to a nice, thick layer. I think they will only be here for the week though. 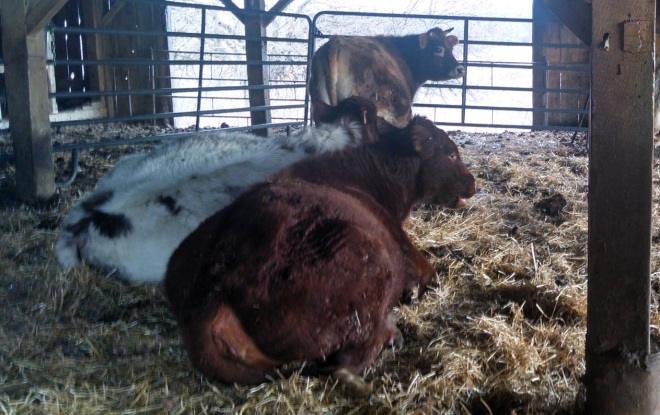 There is a round bale of alfalfa available at all times and we offer grass/clover square bales twice each day. They really seem to want the grass. We feed them outdoors because that’s the current setup. I have the bunks. The cows are there. No big whoop.

I have to say, this isn’t really any easier or necessarily harder than having the cows on pasture. I have a little less walking and water is easier to manage but I’m have to bring the feed to them stored feed and bedding. The cows are, I think, better off. We’re in for a few days of cold weather and it’s far below what we want to subject our pet milk cows to. The shorthorns don’t seem to care either way but I don’t want to split the herd so here we are.

No pictures of manure today. You can bet I looked at it though. It looked nice…as far as manure goes anyway.