I have often wondered what was really happening economically on our farm before 1950. Oh, I know they had beef and sheep and dairy and chickens and bees and an array of field crops. But how many? And in what numbers? This is important to me because it at that time my son is almost the same age my grandfather was when grandpa took over management of the farm. What would that look like today?

I don’t have those answers but I have a better idea of sales figures since dad found a Report of the account of C. Thomas Chism & Marian H. Chism, Executors of the estate of Charles A. Chism. I’m afraid I know very little of the people involved here but it appears the trust was set up to care for Granna Tim (my great grandma) and her handicapped son Billy. I have only seen a picture or two of my great uncle Billy.

He looked a lot like grandpa Tom but my uncle Jack sent me this picture of Uncle Billy in words:

He was a big man, about the size of my dad, but had dark hair and less pattern baldness. He liked walking around outdoors, and they always assigned him chores. (Gathering eggs; chopping wood.) He sang most of the time when he was outdoors–various songs he remembered from the radio; but his favorite seemed to be “Happy Birthday.”

He was the firstborn to a couple who had to wait until ages 42 and 35 to get married. After he came, they went ahead and had two more kids.  It was the job of the whole family to care for [Billy]. He occasionally had epileptic seizures, and it was younger brother Tom’s job to restrain him to keep him from hurting himself.

What you are about to see is an accounting of stewardship. Let’s skip to the end, looks like everything earned is being reinvested into the farm leaving $12.14 “held in trust by said Executors as Trustees under descendant’s Will for the benefit of the beneficiaries and purposes therein set forth.” But what they are earning is almost 5 times the average annual income…and they still had other work they did for themselves. Aunt Marian kept a job in town!

Pretty cool. SO what did they sell off of the old farm in 1948? Let me show you.

I found a few resources online to try to give this listing some meaning but, really, I was only able to guess what the numbers meant. Profit on Livestock Purchased & Resold could be anything. I see expenses on the other side of the page detailing how many dollars they spent in several categories of livestock but nothing to indicate what earned this specific sum. I just have to imagine it follows the formula that less than 1% of overall farm income came from sheep and 27% of farm income came from pigs as suggested by the brochure  Twenty Years of Prices and Incomes Received by Illinois Farmers. From what I understand they sold fluid milk and milked 14 cows by hand. If my guess at their milk check is correct they were selling around 12 gallons each day, leaving some milk on the farm for the household and for pigs. Based on a guess of wholesale egg prices and my understanding of layer reliability of the era they kept a flock of 60-80 chickens. But those are just guesses and, as such, are mostly useless.

So how can I make that spreadsheet useful? What can we really see in it? That my grandpa, who passed away 16 years ago, and his sister just took me to school. Look at that list! And that list doesn’t include other things grandpa did on his own including custom plowing. They even had to fix the barn (the barn their father built). I had to fix the barn too! 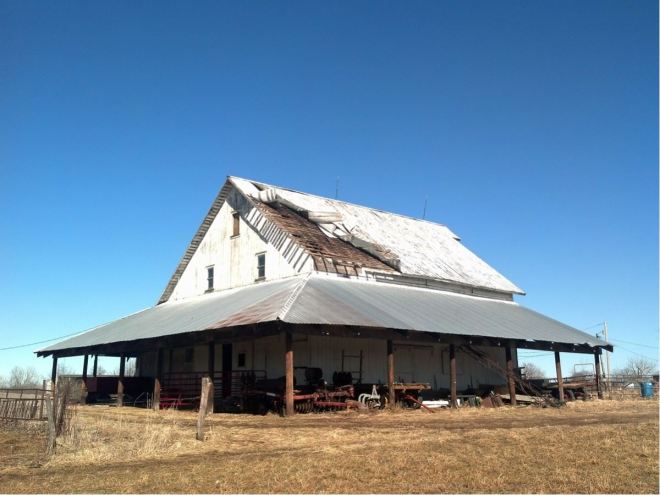 But it’s what I don’t see that interests me most. Why is there so little income from grain? Probably for the same reason they spent $7,000 on livestock feed. Grain was grown to fatten livestock (not people). But the items listed above aren’t the things it takes to run a household and they aren’t the only things the farm produced, just what got sold. There was an orchard east of the yellow house. Somehow they had time to maintain that orchard and can up the produce. And keep a garden. And butcher for their own table. And care for an older brother.

Grandpa Charlie was at least four years older than I am now when he started having children. He was at least 20 years older than me when he had a stroke. Looking at this document I can only reflect on the success he had training his children to take over. They brought in a farm income of $15,000 at a time when the average household income was $3,600. I have a son who is 14. Could I step out of his way in two years, allowing him to run the farm? Should I? He is already larger than me…like grandpa was. I have a 12 year old daughter who is in many ways similar to my Aunt Marian. She works hard, volunteers frequently, gives selflessly, seems to enjoy working with her hands and she has a sharp wit. What will she do with the farm? Could the two of them generate $250,000 in farm sales each year (5x 2014 median income)? What about the other two children? One wants to be a preacher and open a taco restaurant, one wants to stay here and help us.

What will they do with the farm? Will they raise sheep and horses and mules and cattle and chickens and ducks? Will they maintain an orchard? Will they build fences and put up hay? Will they be able to tell me what a disc hayloader is? Will they convert it into a park they visit on weekends while busying themselves with work in town? Maybe the answer depends on me. I’ll come back to that.

I am also struck by what is listed and what I have never seen here.Why weren’t there sheep and ducks and chickens when I was a kid? Where were the dairy cows? I asked uncle Jack what he thought:

Sheep: My dad despised them for some reason. Goats: He got three nannies and kept them for awhile; then came out one morning and he had twelve: three sets of triplets. For some reason he decided he was tired of goats.

Can’t tell you anything about the cattle, except that when I was small around 1950, I do remember we still had a milk truck stopping each morning to pick up big milk cans in front of the house. The milking barn was over at the other place; but the current road south of the pond didn’t exist then—not until they built the pond. So the road by our house which went over past the windmill was the private lane of the home place. So my dad brought the milk cans out to the mouth of the road, next to your house. And this means that 2-3 years after the document you’re looking at, we still had a number of dairy cows. And I always assumed in those early years that there were beef cattle around—usually black ones at that time. Around 58-60 we got Herefords from Montana and raised those for awhile.

“The home place” is the yellow house…the barn Julie and I milk in. Grandpa and Aunt Marian were born at the yellow house. My folks lived there when I was born. But for most of my life it was the place grandpa housed his hired help. It is just storage now. Things change.

But some things don’t change. Just like my elders, I need to make the most of what I’ve got. To do that I need more livestock. I need more cows. I need to add sheep. I need more chickens. But I also need to prepare the next generation to take over. Great grandpa Charlie was, apparently, better at this than grandpa Tom but maybe only out of necessity. Great grandpa Charlie had a stroke but was still around to advise grandpa Tom. But grandpa Tom farmed into his 70’s. One son bought a farm of his own, the other children moved away. Mom and dad moved to another farm nearby when I was 16 but by that time most of my generation of cousins had grown up away from farming. Only one cousin was (is) still here. Maybe that’s why the sheep, chickens, ducks and dairy departed. It is a lot of work without youth to help. Involving the kids now is a big part of making the most of what I’ve got. I don’t need more land. I need additional responsible decision makers.

Henderson includes this quote near the end of The Farming Ladder:

…the pupils are the farmers of the future, and therefore the most valuable and important stock on the farm; for it is their youth and energy which have contributed so largely to [the success of the farm].

How can I encourage my children to take ownership…to protect it, to multiply it, to give it their very best? I have to make it theirs. I have to stop being so critical and step back into a supportive role. Mom and dad and Julie and I have to show them what is possible.

4 thoughts on “The Farm That Was..That May Be Again”