The cows were recently on the alfalfa field. I know it’s kind of edgy to graze green alfalfa this time of year but that’s where we are. I’m trying to save my fescue for later. The alfalfa will be useless in 30 days so the goal was to sprint across the field now. The key appears to be to keep the cows full and to keep the cows full of dry fiber. Hay. But Sunday I didn’t stick to my plan. I offered the cows hay but didn’t ask them to clean it up because the day before I gave them a grazing area that was too small. The cows were hungry. I was in a hurry. So I let them eat some hay then moved them onto fresh, young, dew-covered alfalfa early in the morning.

If you don’t know, that’s a recipe for death. Bloat. The rumen fills up with methane and the cows have a hard time expelling it, front or back. If it continues expanding the cow can suffocate. Obviously, bad mojo. 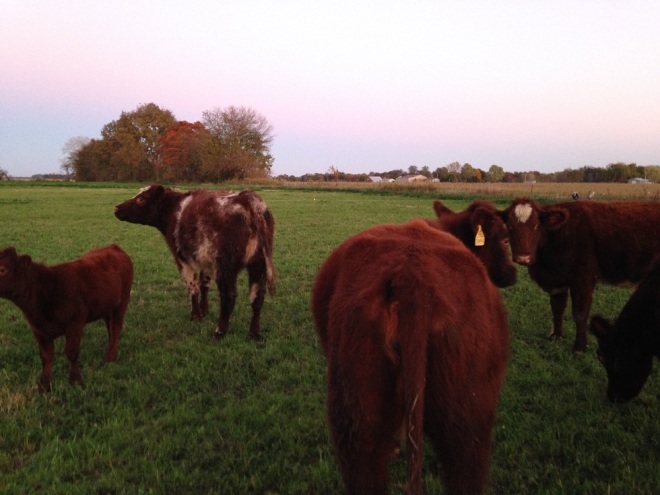 Sure enough, 41 started to look pretty uncomfortable as the morning progressed. Fortunately dad pointed her out to me as we were working on something else. There are any number of real, medical solutions to bloat if you catch it in time but we didn’t have any of those on hand…you can either call me risk-tolerant or just stupid. Take your pick. Since she was still acting normal, on her feet with her ears up, we just needed to work through the gas. Dad started to walk the herd a little bit. Just a gentle walk. This is the time you want to be upwind of your herd, not downwind. Wow. She was looking a little more comfortable so we came to a stop. The cows were all full and just wanted to take a nap in the sunshine. 41 tried to lay down with the herd. She grunted, burped, grunted and burped again. Then she stood up. Then back down. I went to the barn to get the nicest bale of grass hay I could find and began to spread it out, flake by flake, in the alfalfa field. By spreading it out the cows are less likely to try to make a bed of it and more can eat the bale at one time.

A little more walking and a little more waiting and suddenly we could see a slight depression on her left side. Whew! When I came back to check again later the hay was all gone.

What did I learn? The cows need their fiber. They need to eat fibrous growth, not this young, all-protein alfalfa. It breaks down too quickly and leads to trouble…not to mention the splatter behind the cattle. I knew this already but I guess the lesson was reinforced. Maybe I learned a little bit about my own level of risk-tolerance. I am, it appears, more willing than most to make mistakes then hop on the ol’ internets and tell the world about those errors.

That’s nice and all but I also learned that not all cows are created equal. 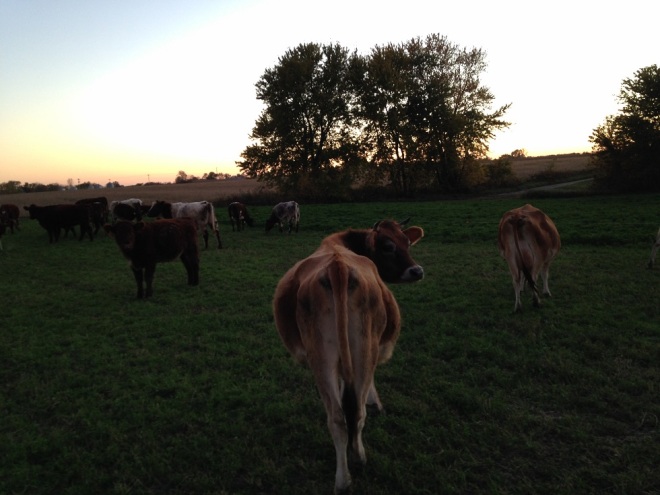 The next day we kept the cows full and put them on fresh alfalfa in the warm afternoon sun. Guess what? Happened again.

So I moved the cows onto a field they haven’t grazed since July. In most places the grass (fescue) is 18″ tall and has yet to form a seed head. Good stuff. Beyond that, there are a good selection of weeds and tree leaves available in their new location. Thick stems break down slowly compared to thin, green alfalfa. Tree leaves have tannins that help balance things out. They went right to work when they got in the new area shortly after sunset.

Two days later the pullets were moved to that exact spot to clean up after the cows. Busy schedules are preventing us from harvesting the older birds. That flock are still out on the alfalfa field cleaning up the mess the cows made there. Yolks from both flocks are bright orange right now. 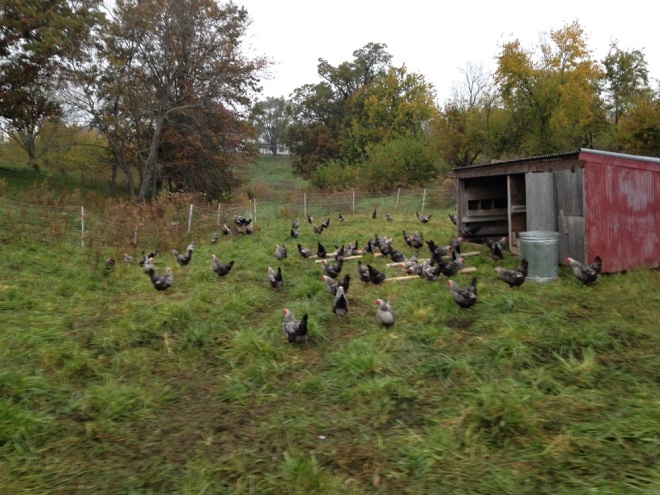 The picture is fuzzy in the early morning light but I think you can see the cows didn’t strip the grass down to bare earth. There are a few places uphill where we are asking them to help with the remodeling but here we are leaving residue. Uphill from here we have a solid stand of thistle and goldenrod with just a pinch of spiny amaranth. The cows helped us out there as you can see by the fence line. 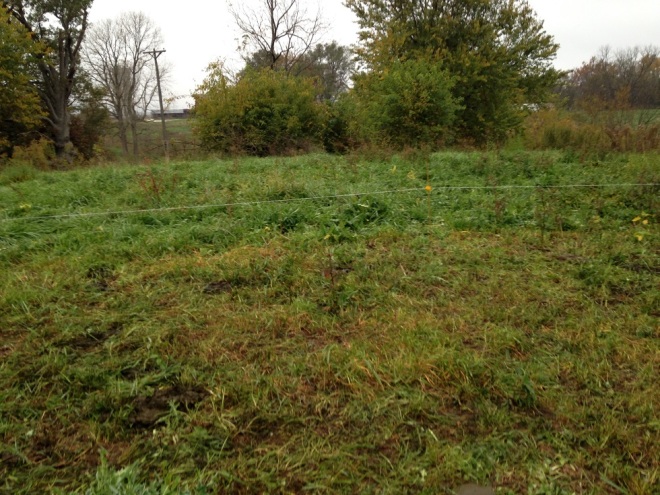 They are a little loose on the fresh green grass but are not needing the intensity of care required when they were on the alfalfa field. Have I learned my lesson? Well, sorta. I plan to return to the alfalfa field after we get a good killing freeze so the cows can rid me of stems (alfalfa weevil live in stems) and add a layer of fertility. But I have to attend to their fiber needs.

2 thoughts on “Grazing Where You Shouldn’t Graze”