Things vary from season to season and day to day on the farm. Weather changes. Livestock grow. I need help with different chores from time to time. My pigs are my favorite helpers. Julie laughs when I sell the pigs because I act so relieved but within 48 hours I’m racing to buy more pigs.

I can explain that several ways.

So I like having and selling pigs…and having them again. But that constant stream of pigs on and off of the farm means we change almost overnight from small groups with massive destructive power to small groups with massive cute power. From pigs that generate 25 pounds of manure each day to pigs that weigh 25 pounds each. These two groups have radically different needs and can exert radically different pressures on their environment.

And don’t overlook the change of seasons. Seasonality brings its own challenges and each batch of pigs takes 4 months to grow out. Small pigs do better than large pigs in hot weather. No pigs do well outside in wet snow. Care has to be taken when pigs are on pasture in monsoon season or the pasture itself will wash away. And that’s what we’re in now; Monsoon season.

But I’m getting ahead of myself. Sometimes we just need the pigs to churn up the ground and add in a big dose of fertility as we did when establishing our garden a few years ago. Our garden is great now. It was initially compacted but a little row-by-row dose of broadfork and a covering of mulch provided all the resolution required.

Sometimes we need the pigs to help us compost winter bedding in the cattle barns. 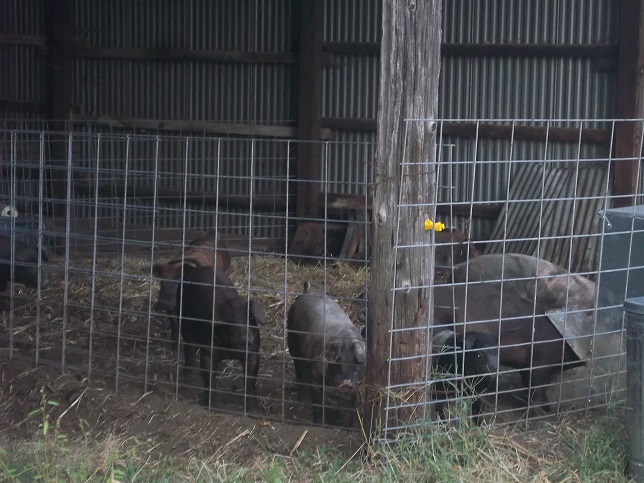 Sometimes we put the pigs on the hillside and ask them to root up rhizomes and eat worms and dig wallows. But I’m tending to drift away from that last one. 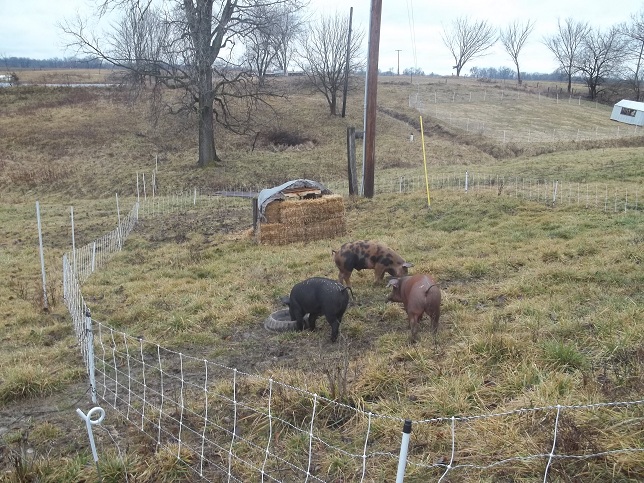 Keeping livestock is all about enhancing the soil. I have cows because cows help my soil to be healthier. Same with chickens. They cycle minerals through and dispose of vegetation that would otherwise stand and oxidize, shading out future growth. They provide a dose of bacterial activity in the soil to balance out fungal life…maintaining diversity in the soil. Pulsing organic material on the soil by way of trampled organic material, and in the soil by way of decaying root systems of mature plants grazed by the cattle. The movement of the cattle on the landscape enhances both the cattle and the soil over time.

Keeping pigs on pasture needs be the same. I keep pigs on pasture not to have pastured pork to sell but, instead, because it serves in advancing soil health. Throwing pigs on dirt and mud during periods of prolonged rain will cause soil loss and soil compaction. Putting pigs in cold mud will only hurt pig health, whatever customers say they want. The site Natural Pig Farming makes this point well. With this in mind, we use a number of techniques to both respect the pig, build the soil and make our customers happy, just as we vary grazing techniques with cattle.

This past year we have offered our hogs access to the nut crop in the forest, deep bedding in barns and, most recently, work reclaiming an overgrown hog lot. Our hog lot hasn’t been in use for nearly 20 years and has grown into a forest. 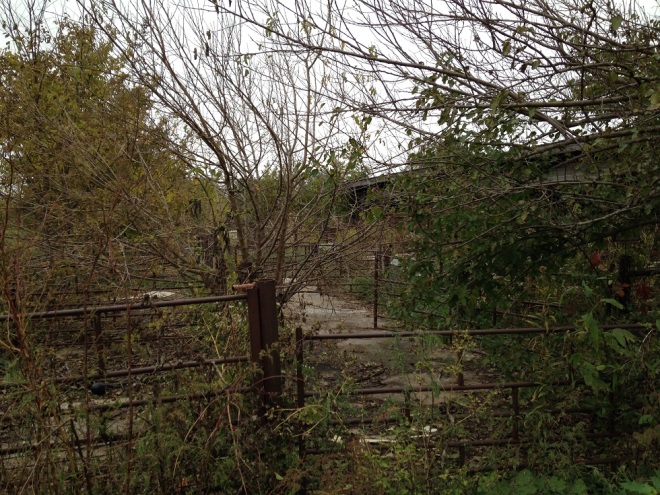 Most of the bays in the building are being used for storage. I sticker and stack my green lumber from the sawmill in a couple of the bays, we have greenhouse parts and …well, who knows what else out there. Stuff. But the four bays to the west are unused. Because the weather has been cold and rainy for the last two weeks the last place I want pigs is on pasture. They would work up the soil and allow it to wash away. So instead, I’m putting them into the forest with the concrete floor, one bay at a time.

Even here they can root and dig and eat grass. I have four pigs in one bay rather than the 60 or so it is designed for. Their job is to reclaim the concrete for me. I filled the sheltered area with straw so they have a comfy bed then leave them to work until the job is done (about a week). Then I come in behind them, shovel and scrape it all clean then compost the manure and bedding under shelter.

I have all kinds of reservations about doing this but obviously I think it’s better than putting my pigs out in the cold mud. But it has me wondering what the limits are. Clearly hogs are adaptable animals. 99% of pigs are raised successfully on slatted concrete floors. Heck, Salatin has concrete strips running the length of his hoop structures to keep the pigs from rooting up the ground. He just covers it in a thick layer of deep bedding. And that, to my way of thinking, puts the pig closer to its roots. But I’m already somewhat close with the trees growing in my lot. In Dune, Dr. Kynes’ last words were “I am a desert creature!” I think of this when I look at my pigs. They are forest creatures.

So how can I go about making room for a forest where none was intended? How can I put deep bedding over a concrete floor that was designed to be scraped clean regularly? Won’t the litter wash out in heavy rain? Won’t it stink if it gets wet?

As long as the litter was kept dry, the temperature of the litter-bed was maintained and the odor of the pig farms was controlled.

So I have this nice facility. It’s all paid for. And I can’t use it because it doesn’t have a roof. Again, Natural Pig Farming suggests I should add a roof, otherwise there is no way to install and maintain deep bedding. Animal Welfare Approved (not a member) suggests that:

They have that right now because of the organic material that has gathered and grown for 20 years. Beyond the goal above, I’m taking steps to keep uncomposted nitrogenous wastes out of our streams. There is a lagoon off of the hog lot. If anything from our four pigs should escape the lot it would have a hard time escaping that.

I’m saddled with a hog floor I didn’t ask for. It’s just here because of a decision made by the previous generation. But now that I have it, is there any way I can leverage it? ..even if only seasonally? I think so. But it’s going to take some tinkering. It’s easy to focus on muck and money. But we can’t overlook the forest creature.

On the topic of hog floor muck, tune in later this week for The Adventures of Compost Calzone in the Wild West!

10 thoughts on “A Pig For All Seasons”