41 gave us a bull calf yesterday afternoon. Another surprise, unassisted calving. He’s a strong bull calf with a big head. Here he is hiding behind mom when we caught him nursing this morning. 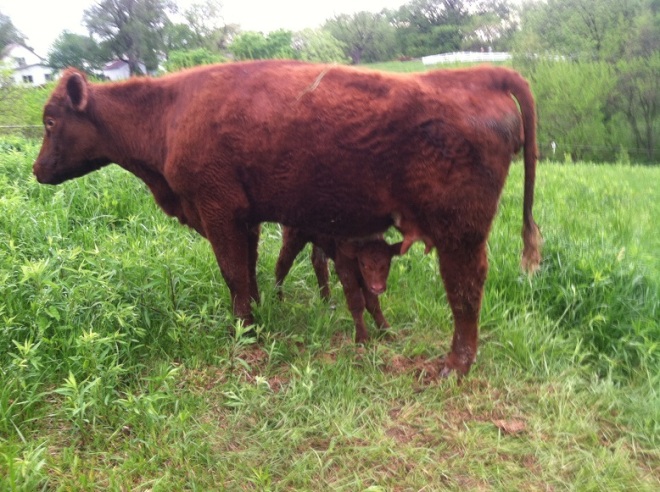 The new calf was born yesterday afternoon. He had all kinds of energy last night but we hadn’t seen him latch on and nurse. I went to bed a little concerned but this morning we caught him in the act and we saw his meconium so that’s it. Red calf with a white belly doing everything he is supposed to do. Now we just have to get 41 ready to breed again in August.

We are still sprinting across the pastures trying to cream off the energy. Things are firming up if you know what I mean, but the white calf still hasn’t slicked out.

I don’t think she’s going to make the team. To this point the white calf is the very definition of a poor do-er. I’m going to have to worm her and see if she comes along.

Just Mable (we usually say May-Belle), 111 and 76 remaining to calve. We’re overdue for some heifer calves here…but I would prefer that May give us a bull calf as she’s a Jersey bred to a Shorthorn bull.

9 thoughts on “Another Addition”