I took a vacation day yesterday to finish getting our chick brooder ready and cut some firewood for next year. I also took care of a few odds and ends around the farm. Finally, the thaw and rain have caused a little flooding so the cows had to be moved to higher ground. Thank God I still have stockpiled forages up high! I haven’t been writing much lately because that’s just how the days have been. I get up, I work. I finish working, I go to bed. I try to make time in there to just hang out with the kids which means I am not writing.

A friend at work asked me if I had fun on my vacation day. “Yup. I did. I cut a bunch of firewood! I’m really sore today too!”

My inner weird showed up again in an email to a friend. I have convinced him that he needs a couple of pigs to boost fertility in his yard and garden and help cycle resources that otherwise go underutilized. I said, “If you haven’t met me, I’m all in favor of boiling something down to its essence. You might call it “oversimplificaiton”. Further, I don’t scare easily. And I’m willing to endure significant pain to get the desired result. Let me give you an example. I could save 70% of each paycheck if I just had a modest home in the suburbs. That money could be invested in any of several index funds. With all my free time, I could write books about homeschooling or family government. But instead I’m pouring all of my money and time into a farm, driving 3 hours/day and fighting to keep animals alive so I can kill them in the dream that farming will at least prove to be a wash financially.”

I wish I could write more. Lots of neat things are happening around the farm and I would love to show them to you. This morning there were small, green blades of grass behind where the cows have grazed! You should see the manure the cows put down in the pasture as we strip grazed through the snow! But then, there’s that inner weird again. 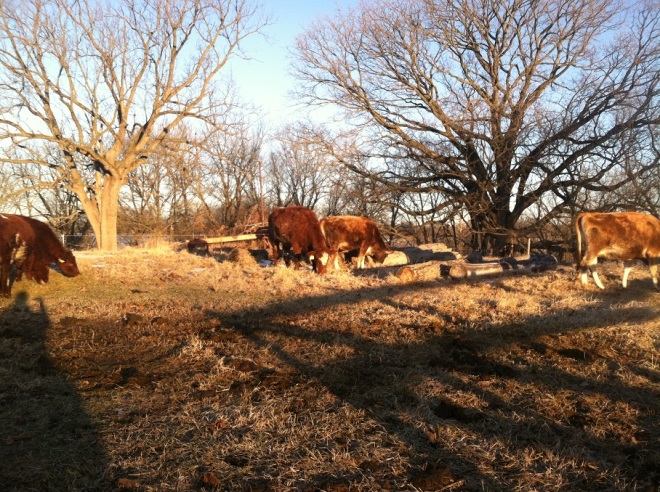 We have lived in the suburbs…within distance of pizza delivery. I have cut the grass and washed the car. That’s a sweet gig. I have chatted with neighbors over the fence and discussed our favorite sports teams and ribbed each other’s joking inadequacies. It was fun but I was bored. Unfulfilled. It was like I was waiting for something to happen. Try as I might, I couldn’t make it work. My inner weird was always lurking…ready to shock the world. “I was thinking of pulling out the burning bush and replacing them with blueberries. They would still be pretty but would also give us fruit.” Somehow (and I really don’t understand why) that was just the wrong thing to say. For reasons I still can’t fathom, food can’t come from people’s yards.

So here we are. Too busy to tell you about it. Still as weird as ever but with a 60 acre yard and lots of food.

9 thoughts on “Satisfying My Inner Weird”