We shipped out last pig out on Tuesday of last week. We were scheduled to pick up a new batch of piglets on or after Feb. 1 but I couldn’t stand it any longer. 5 days without pigs was 5 days of misery. Julie saw it coming and laughed at me. She knows I love having pigs around.

Sunday morning we made room for and assembled a pig pen in the greenhouse. We use a big water tank for a drinker and it would freeze solid if we tried to keep the pigs outdoors. Since ice is a problem and frozen piglets are unhappy piglets I chose instead to ask the chickens to share space.

I made plans to meet Mike Butcher at noon for a couple of 60 pound pigs. Mike raises hogs for a couple of well-known major organizations, each with their own audits and specifications. His sows farrow outdoors and never see a gestation crate. His pigs are raised on deep bedding and he uses no antibiotics. Mike has a clean, neat hog business. He gives me a discount on pigs since they are, in his own words, going to a good home that appreciates their health. Not only do I appreciate their health, I appreciate their breeding. These are the best eating hogs we have raised and fatten quickly. Mike does it right. 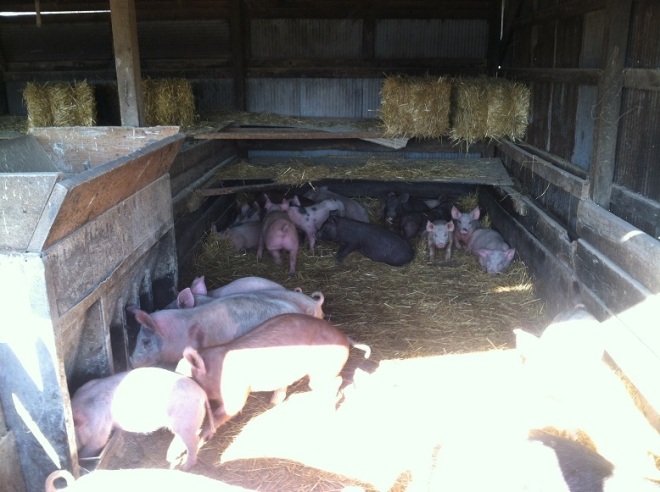 Plus he generates mountains of compost.

Mike is justifiably proud of his business. He is also proud of his herd of large black hogs that he has kept for decades. He is always anxious to show us all around the place, look in any and every building, play with newborn piglets…whatever. I have never seen a sick animal on his place. Dad was with me yesterday and commented on how clean all of the pig pens were. Mike works hard and it shows.

We loaded up four piglets in a homemade crate (more on that another time), wrote Mike a check and headed off down the road. That sounds too easy. I caught 3 piglets, dad caught a fourth and we carried them to the truck. That still sounds too easy. I walked through groups of pigs, called out the one I wanted and we (my son and I) sifted through the group until I could get my hand on the specific one I wanted to take home while Mike’s Jack Russel Terrier worked to add to the confusion. But it’s not enough to get your hand on a 60 pound ball of muscle. You have to hang on to it. Ugh. Then, wriggling pig in hands, I climbed out of the pen and wheelbarrowed each pig over to the truck. Then I lifted each one, stepped up on the tailgate and gently lowered each into the crate. I still didn’t describe it well enough because I left out the amount of manure that gets all over me during the operation. But you could probably figure that out on your own.

The pigs are comfy in their own portion of the greenhouse where they will remain until April. They went to work digging in the bedding right away.

I have a lot more to say about pigs and why I found it so hard to go without a pig on the farm for even a full week but I’ll save that for another time. I do have to say, catching and wrestling pigs was just exactly the kind of workout I was discussing in yesterday’s post. I’m sore today.

9 thoughts on “Just a Couple of Pigs”