When the bad weather hit Saturday afternoon we moved the cows to the barn. We have been grazing stockpile but with wind chills near -40 F we thought it would be best to have them out of the wind and in a convenient place. Convenient for us…not necessary for them. Really, the cows would have been fine standing together on the leeward side of a hill sheltered by a tree. It really was an issue of convenience for us.

Each morning I would clear the manure from a stretch by the fence and put out bales there. I don’t have a feeder in this lot…something I’ll have to address going forward. I would split the bales in a couple of different locations. Each morning and each evening I would offer a square bale of alfalfa and a square bale of grass. While the cows were busy grazing I would put two or three bales of straw down for fresh bedding after cleaning up big, obvious messes. 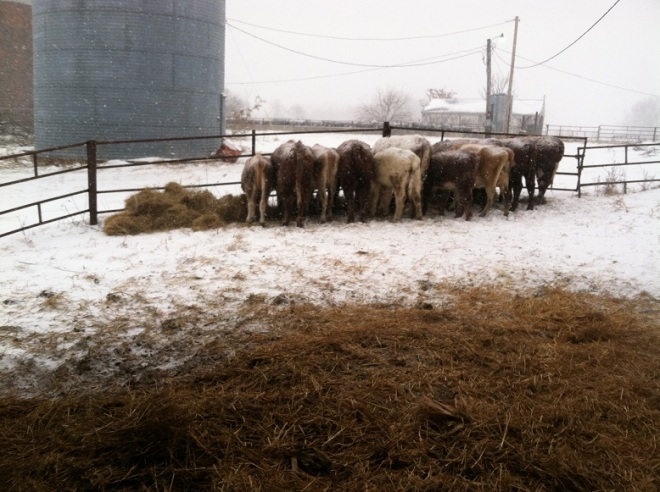 Then I would pull the hose out of the barn loft and refill the water trough, breaking out the ice along the way.

I have mixed feelings about this entire setup. First, since I don’t have feed bunks I didn’t feel that the cows had a clean plate to eat from each day. It reached a point where there was so much frozen urine and manure I just had to do my best…and my best was barely enough. When the cows are on pasture they get a little more ground each day. That new ground is like a totally clean plate and is a great place to feed them each morning. Then they can graze their day away.

Second, I just don’t think the cows were happy. They just sort of moped about. Like they were a little stir crazy…or had as much cabin fever as the kids did. This was more completely expressed Thursday morning when we led the cows back to pasture. They ate their hay then went running, kicking and bucking through the pasture. They seemed to enjoy stretching their legs for the first time in 5 days.

The cows are not out of their fence. The previous day’s fence posts were frozen in place and could not be removed. The cows bent them all. Stinkers.

So I’m glad, for my own sake, that I have the option to shut up the cows in the barn lot. But I can see that it’s maybe not the best for the cows. Next year I’ll have the entire feedlot for my own use complete with feed bunks. I’ll design my pasture usage to preserve and stockpile the pasture near the feedlot so I can, if needed, allow the cows access to shelter and feed in a bunk but still give them access to the larger pasture area. They will be able to go where they like while still allowing me to feed with relative ease. I’ll just have to make sure I don’t get lazy and feed them in the bunk all winter as I want their nutrients on pasture, not in the feed lot.

6 thoughts on “In and Out of the Moo Cow Hotel”