My shorthorns have never had to work for their dinner in the winter. I mean, it’s one thing to put them out on the frozen ground and ask them to clean up orchardgrass and leftover alfalfa. It’s another thing entirely to ask them to bulldoze through 6″ of snow to graze the grass beneath. Worse, we asked the cows to break a new trail across the pond dam and meander to the barn to access their new pasture. We rely on the Jerseys to move the herd. We opened up a new path and showed it to Flora. She led the way. Cows were moved. No pushing, no hollering, nobody got angry. We just let the heifers follow another cow. She knows what to do. No big whoop. 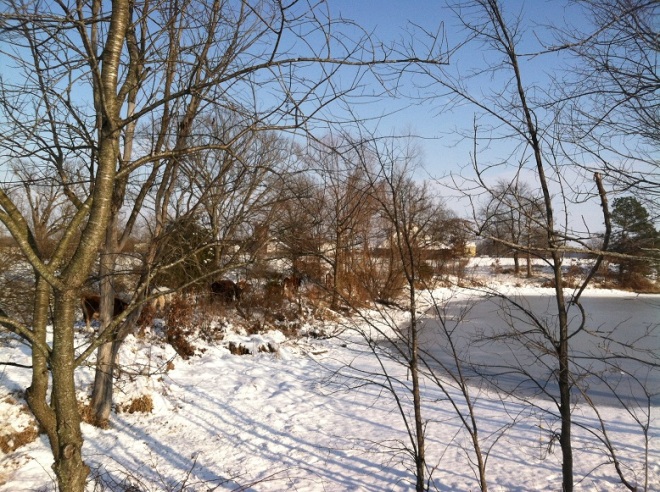 Same deal grazing in the snow. The shorthorns don’t seem to know what to do. Again the Jerseys knew the drill and they led the way. Well, one of them led the way. The other follows in our footsteps. Literally. She eats where our feet revealed the grass beneath. The Shorthorns figured it out quickly enough and soon cleared and grazed large areas of the pasture. 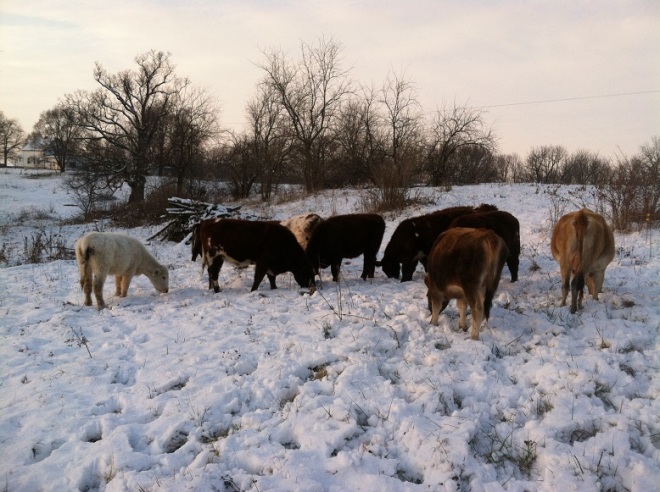 This ground hasn’t been grazed since late July. Last I checked there was 14-18″ of fescue standing as well as a good mix of radishes, turnips and the remains of summer forages like sudangrass. Hopefully this will give us some relief from feeding hay. Three days last week we fed two square bales/day among the 10 cows. I know that’s not much but I’m not happy about it anyway. According to our hay pile, we have to do better.

The cows are in the SE corner of the field where the water supply is (a narrowed and compressed #24 from this post). Here’s the same picture from April of last year after we let the horses graze it to the nubbins. Compare to the picture above to notice how much brush grew back in 8 months. 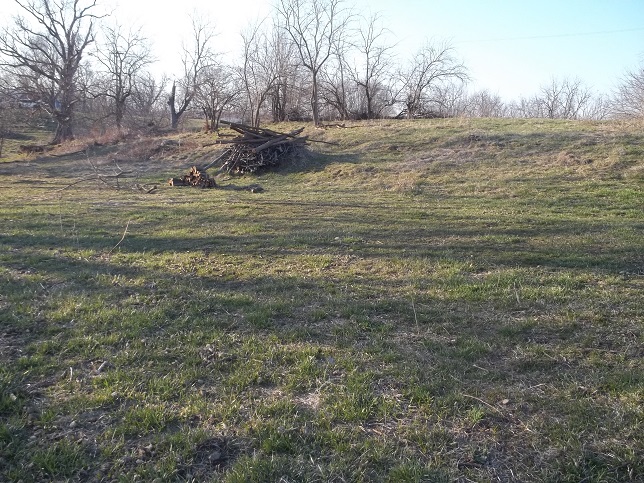 We made a narrow strip running to the North. Next we’ll open up a strip to the west a little at a time, not restricting access to places the cattle have already grazed. I know this will allow some concentration of nutrients but it will also allow the cows to pick their winter shelter and access the water supply. So, yes, I’m lazy.

The winter shelter thing was a recent comment from my father…his concern was that strip grazing wasn’t allowing the cows to find the place in the pasture where they are most comfortable during a storm. As we move them around they have usually access to the leeward side of a hill or just to a comfy spot under a tree…especially when a storm is brewing. We try to make sure there are a variety of options in each section for winter grazing. Summer grazing has its own list of considerations (shade) but winter is more about shelter from wind than about keylines. Also, I have to balance cow comfort against winter feed requirements and future pasture productivity. The cows are the tool, not the target. I think there is a middle ground that suits everyone’s goals. Happy cows, healthy pasture, even manure distribution, lowered (or eliminated) hay requirements. That’s what we’re shootin’ for anyway.

The snow should melt this week making things easier for the moos. How’s grazing at your place?