Matron mentioned chopping ice in a recent post. We chop ice too.

It is no use trying to drag hoses 1/4 mile across the pasture to where the cows are strip grazing. The hoses are frozen. I do my best to lay them downhill on South-facing slopes but when the high temperature is 25F, ice tends to build up. The best you can hope for is a big buildup of ice at the end of the hose you can work out with your pocketknife. But odds are, somewhere along the way, the ice froze in the hose and caused a buildup before it could run out. So we chop ice in the pond. 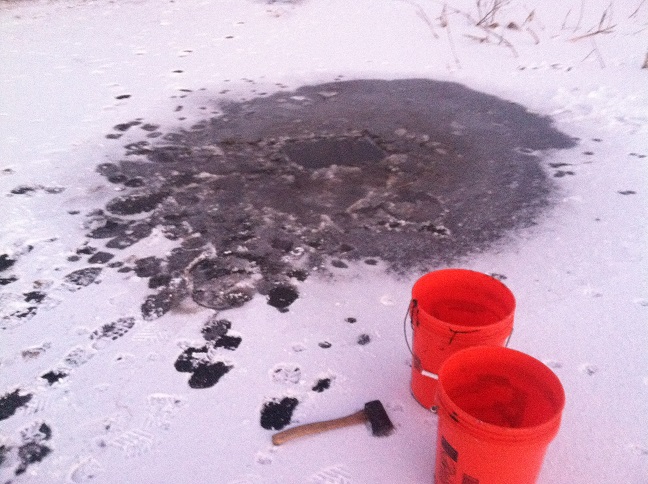 I go out onto the pond where the water is at least 18″ deep and cut a hole in the ice. At this point the ice is a minimum of 2.5″. Not thick enough to trust but thick enough to get the job done if I stick to the shallows.

I cut a hole a little larger than the dimensions of a bucket laying on its side. Each chop sprays ice or water at my face. It’s always a good time to come into the house with ice caked into my beard. Almost every bucket brings up pond moss and it is not uncommon to scoop up bullfrog tadpoles too. I try to put those back.

Then I make the short march back to the trough with 10 gallons of water in my hands. 8 trips later, I’m done. Julie puts in a couple more buckets in the afternoon then in the morning I chip out all the ice and dump out the remaining water to start fresh again.

We were letting the cows water themselves at the pond but we found they are wary of the ice at the edge. Letting the cows get their own water is far easier for all parties involved and would necessarily be the solution if we had more cows on winter pasture. But we don’t. And this works.

In another week or so we’ll leave the alfalfa field and go to the fescue stockpile. There is a newly-installed spigot in that pasture. WHEW! After that? I dunno. We’ll start the cows up by the cemetery and work our way through the triangle and through the bottom. Hope the pasture lasts!

The pigs are much easier. They have a big water tank sitting on a mountain of compost. There has been a film of ice at the very top of the water. Otherwise, the compost keeps the water running.

3 thoughts on “Carrying the Cows’ Water”