Fall has arrived and things change quickly around here. The barn swallows disappeared a few weeks ago, the other birds started flocking up, huge swarms of migrating dragonflies have come and gone and now hawks are migrating through.

Not much I can do…but there’s not much I want to do about hawks. Dad and I saw a juvenile hawk sitting on a chicken tractor, looking at the broiler chicks beneath.  He was obviously frustrated by the wire. For some reason he was ignoring the layers. Maybe the were just too big for him.  Who knows.  As we went past he spooked and took off. A few minutes later he speared a pigeon off the roof of a nearby silo.

We have reached the point where you can’t take a step in the woods without ducking under a spider web. It is as if we finally reached a critical mass of insects allowing more and spiders and praying mantises…or they have just eaten so many for so long they are all big and fat. And believe me, we have seen some big, big spiders and I swear I saw a 10″ long praying mantis yesterday. 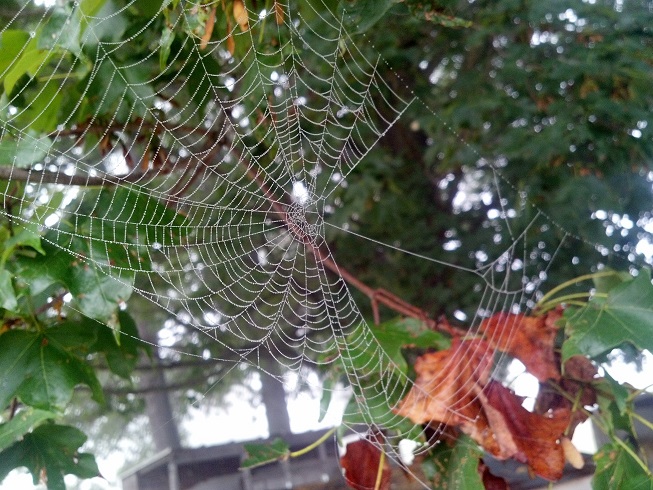 The sunflowers that were all so pretty in August have drooped over so we cut the heads and set them to dry. I’m glad we could complete that cycle before the cows grazed that area. Hard to believe it took us 4 months to rotate pastures around the farm. 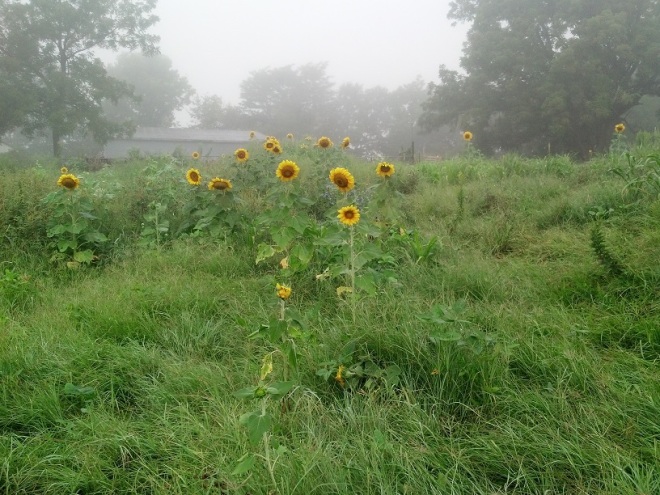 Sunflowers as of Sep. 1

The cowpeas in the pasture didn’t set a pod all summer until September. Same with the cockleburs. It became increasingly unpleasant to pull cocklebur plants in my pasture over the last month.

Dad keeps a detailed journal of changes, frost dates, etc. I don’t currently do anything formal though I used to track the frost dates and the first time I heard a spring peeper (Pseudacris crucifer) and our toad (Bufo americanus). Do you track the changes around you each year? On this topic, I would like to revisit the book Great Possessions by David Kline. I haven’t read that in years. Less seasonal but just as good is Scratching the Woodchuck.