It’s summer.  It’s time to stretch pasture.  If this year follows the normal pattern, it’s about to get hot and dry, though it’s cool and rainy this week.  I am banking on the grazing we did all spring (two complete rotations) to have left enough carbon,  fertility and residual grass to carry the grazing through summer drought and into a stage of strong recovery for fall and winter grazing.  I took this picture 34 days ago:

Here is that same spot today.

Recovery happens.  Look at that tangled, matted mess of grass, clover, thistle…probably 50 different plants all within arm’s reach.  (It’s probably laying down because I need more calcium).  I have inches of mulch from stepped on tall fescue matted on the ground all over my farm.  From that I have a diverse, thick stand of forage that’s hard to walk through.  That’s the goal.  Increased forage diversity and density.  If we accomplish that goal we can carry more cattle.  The slope South of the house was a thick tangled mat of leafy fescue this spring, the result of hog manure last winter.  Much of the farm looks like that now except it’s not pure fescue.  It’s amazingly diverse, dark green and leafy.  The frequent rains and cool weather are only helping the cool-season grasses too.

Now, I don’t think 40 days is enough because just beyond the reach of view the recovery is much less.  Then it looks better.  Then worse.  We covered 8 acres in 34 days.  I have to slow things down now that the grass is slowing down.  I have a few acres of reserve we have planned as July grazing.  That should give us the extra time we need to achieve recovery while allowing room for wildlife diversity on the farm and plant species diversity.  Also, if I had tried to graze those few extra acres in the spring I would have been further behind on my primary grazing areas.  The best option was to just let it go but to be successful this requires coordination, planning, preparation and a fair amount of guess work.  For example, we were here on June 11th.

Today it looks like this (from a slightly different angle, sans moos): 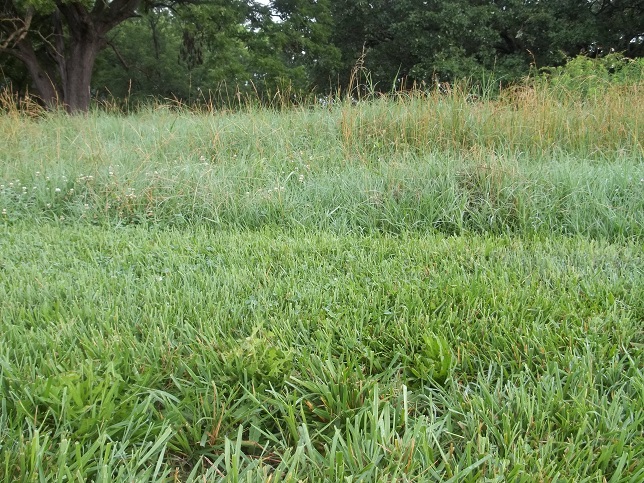 All that grass was tromped turned into a sponge and food source for the soil.  The dense mat of dead grass holds moisture as it decays feeding the growing grass.  You can see the mix of new and old grass in the background compared to the mowing line that is the path to the family cemetery.  One might think it’s time to graze it again but I think that would be a mistake.  The grass is tall but the forage hasn’t recovered.  You’re seeing tall wild oats, some fescue and quite a bit of clover but the remaining forbs really haven’t recovered yet.  I could graze it now but I’ll get more bang for my buck if I just hang on a bit longer.  More root growth, more plant diversity, more volume of grass.  I just have to wait.  Besides, drought may start tomorrow and that standing grass is money in the bank.  But let’s say I’m wrong.  (It’s OK.  I get told I’m wrong a lot.  No, a lot lot.  (As if I’m not insecure enough.))  The grass will go to seed, the cows will mat it down and my next recovery will be even stronger and more drought resistant.

It was with these thoughts that I spent some time walking the pasture with my wife last night.  We looked at forage recovery, quality and density and, also, at our cows.  This is the first year I have managed grazing cattle, it’s the first year the pastures have been allowed to rest, it’s the first time these cows have had to graze for a living…lots of firsts.  I have two that are slick and fat, two that are slightly less slick and have less belly (one with ringworm), and two that are carrying good weight but also carrying lots of hair (both are mostly white).  Greg Judy would cull the last four.  I explained to my wife that those four heifers are probably just here to eat grass with the hope of throwing bull calves.  I plan to breed them to a more fescue-tolerant bull but the future herd will probably come from the two slick cows and any others I can find like them.

I have 3 acres set (maybe 4) set aside that we haven’t touched yet this year.  I have 4-5′ tall weeds out there.  Starting this week the cows are expected to knock most of it to the ground and eat what they can.  We’ll move pretty quick through there in narrow strips.  This is a remodel job.  Should be exciting!  That part of the pasture has always been a nasty, weedy mess.  Now we’re going to remodel before those weeds go to seed.  Then we’ll let it rest until we graze in the fall again then sled on it in the winter.

The rested ground is kind of a weird thing but Greg Judy mentioned it in a video, I had the acreage to spare and though we would give it a try.  I hope there is something they will eat out there.  We’ll see.  I think it will work well from a carbon perspective if the cows can find something to eat.

2 thoughts on “Grazing According to Plan…and Recovery…and Faith…but Mostly Plan.”