I loved my grandma Chism and would like to share a couple of memories of her that stand out in my mind.  Lots of memories of grandma in her house (the house I live in).  She built the kitchen cabinets.  She always hung mistletoe in the back room at Christmas (she loved kisses).  As an adult she came to Christ and spent large volumes of time reading her Bible later in life.  She enjoyed painting.  She made bookshelves for family members using pine and she preferred a fruitwood finish.  She could whip up a lunch for 2 or 20 in the same amount of time, never knowing how many people grandpa would drag to the table for dinner. 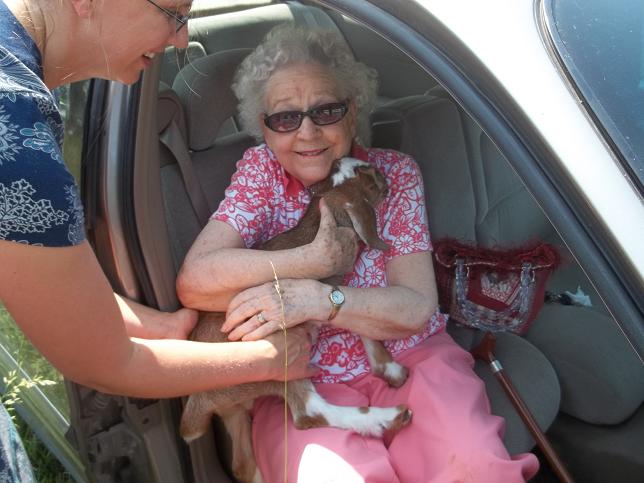 She always had cookies on hand.  Oatmeal chocolate chip cookies were almost always in quart bags in the freezer.  My cousin (who is 15 years older than me) and I would often share a bag with a glass of milk at the table.  Those cookies say “grandma” to me.  I’ll share the recipe but, please understand, the recipe was written down and she said, “That’s just about right”.  Here it is as written in the Chism Family Cookbook but trust me, add more flour.

Drop by teaspoonfuls on greased cookie sheet.  Bake at 375 for 12-15 minutes.

I was 8 at the time and I wasn’t present for the back story but here is my understanding of how it all went down.  It seems there was something grandma was wanting to buy.  Something she really, really wanted to buy but grandpa said she couldn’t because the money was too tight.  This was a normal condition in the household but this time, whatever it was, grandma really wanted it.  Grandpa went to an auction and came home with a 1950 Oliver 66.  Now, try to picture the event.  Grandma was on the porch when grandpa came home with a tractor…after telling her they didn’t have any money.  If you ask me, grandpa thought the price was fair and bought it on impulse but when faced with his wife he said something like, “Well, it’s like the tractor I started farming with.  I bought it for Christopher.”  As if buying a tractor for a grandson would somehow make it all better.  At any rate, it looks like Grandpa:1 Grandma:0.

Fast forward a few weeks (maybe months).  The family makes the drive 100 miles to visit grandma and grandpa at the farm.  Both are at the door.  Grandpa has no idea what is about to happen when, as I get out of the car, grandma yells, “Christopher, go into the barn and see what your grandpa bought for you.”  I gave a puzzled look at my grandpa and remember him standing with his head down looking defeated.  Grandma gets the win.  I still have the tractor.  My dad restored it years ago and took it to a number of parades.  We sometimes use it to pull a hay wagon but it is mostly retired…but still cool.  Thanks Grandma!

A few years ago my grandma moved to assisted living.  For a short time the house was rented to a crew of men from Missouri who were installing rural water in the county.  Before then I had never seen mud on the carpet in the back room nor had I seen beer cans or poker chips in the house.  They finished their work just as Julie and I were looking for a farm.  It was further from town than we wanted to be but we decided to go for it.  We rented my grandma’s house at first and that gave us an acre to start with goats and chickens.  Then we bought the farm…in the most literal usage.  Though I live here now, it’s still my grandma’s house.  I have trouble with some of her rules.  I know what rooms I am allowed to eat in.  Weird.  I put my garden where she had her garden.  But things have changed.  We don’t watch TV (let alone Lawrence Welk) so our living room isn’t focused on the TV altar.

Great Margie is going in a hole?

My 4 year old nephew is a cute, smart, manipulative (lol) little guy…but still cute.  When the tractor came to dig the hole all of the kids ran out to the cemetery to see what was happening.  One of the children said he asked why we were going to put Great Margie in a hole.  We took a moment to explain the grave and rock are just the memorial.  Great grandma isn’t here anymore.  We are honoring her passing and work to preserve her memory for future generations.

Her Story Goes On

She believed that she was not an accident.  She believed that life has value and that value is not measured by her flesh.  That our bodies are temporary but life is eternal.  That an eternity with God is far preferable to an eternity without Him.  She believed that Christ left heaven, assumed a human form, came to Earth and lived as a man with one exception: he did not sin.  She believed he was killed, not because a few people in Jerusalem 2000 years ago were bad but because all men have fallen.  Because all men needed his pure sacrifice to atone for our sin debt.  Further, that Christ arose from the dead, defeating death and defeating the hold sin has on our eternal lives forever.  That one sacrifice, made for all, acts as a new covenant with God, bridging the gap between His perfection and my natural inclination to go my own way.  Grandma believed this story and I believe Grandma has gone home.  Grandma told me this story.  Our true Chism Heritage is not merely on of agriculture.  Ours is a heritage of faith.