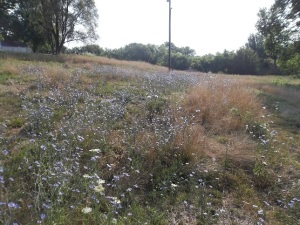 Overall the pasture is a dry, weedy mess.  It hasn’t rained for weeks.  Nothing is growing.  The corn isn’t filling out on the ears, the beans aren’t making.  It’s not a good year to rowcrop.  I haven’t fenced my cousin’s cows out so it’s still open grazing.  I need to get them fenced out soon so I can begin rotational grazing (even if that’s rotational hay feeding) my own cows and letting the pasture rest to build up something of a stockpile.  There is some pretty good pasture still available North of the cemetery in the bottom but for some reason the cows don’t head that way.  Maybe the grass is sweeter where the chickens have manured.

The raccoons have been eating wild cherries by the pond.  You can see where the whole raccoon platoon troops by every night.  There’s a group of four.  They march past the pond, down the hill by the road, scoot by at the end of my driveway, then needle their way through the logs and brambles to an old collapsed culvert where they sleep all day.  Yeah, I have scouted them out a little bit.  Yes, I missed. 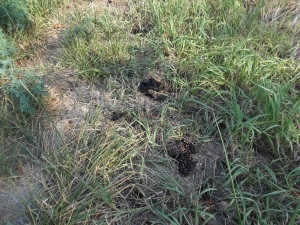 The alfalfa blooms were really pretty.  I took these pictures several days before we mowed hay.  I didn’t see any sign of my bees working the alfalfa but the bumblebees and japanese beetles were out in force.

Then there’s the thistle.  Always the thistle.  We cut and salted thistle until it got so hot we couldn’t stand to do it anymore.  The seed dispersal will overtake our efforts.  I’m counting on high-density planned grazing to win this battle for me in the long term.

Ah, poison ivy.  If only you were a cash crop.  I’m getting itchy just looking at it.

Next month we should see the goldenrod come in bloom.  Goldenrod honey tastes terrible but it does feed the bees.  Here’s to hoping for another hay crop.  Rain would sure help.  How is your pasture doing this month?

5 thoughts on “Strolling Through the Pasture July 2012”