Do you have mulberries where you live?  Do you even notice them?  We have them here.  When I was a kid in New Minden we had one in our back yard next to the gate that led to the alley and Mrs. Ruth’s yard.  There was a crotch in the tree just right for a 7 year old to park in and make himself sick eating berries.  I did.

Today we baled hay in the bottom where mulberry trees abound.  I picked a handful while I was walking out to where dad was ready to bale.

I picked another handful when the baler went under a mulberry tree.

I picked yet another handful for good measure.  Don’t mind the hay hook. 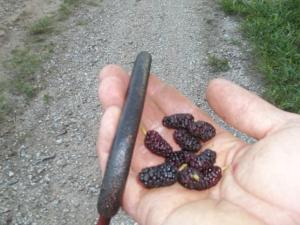 I also took inventory of the dewberries crop.  Not as many as I would like to see… 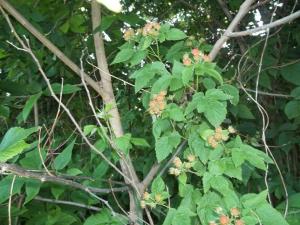 We pick and freeze as many as we can get my hands on but we really don’t go past the edge of the woods because there’s a bumper crop of poison ivy out there every year.  This year is no exception.

Each spring we clean out our freezer and find forgotten gallon bags of berries and make a big batch of mulberry, dewberry, blackberry, strawberry mixed jam.  Yeah.  It’s pretty good…better on ice cream.

So anyway, we were out there to make hay.  I’m a little allergic to hay.  On the third pass I started sneezing.  By the fourth pass my hankie was soaked.  Dad runs the baler clockwise around the hayfield.  Both of dad’s main fields are on a slope so it’s an interesting ride. 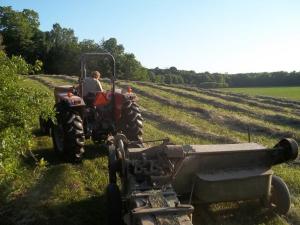 Between the two fields in the bottom and the barn lot we put up another three wagons of hay.  We have had an unusually dry spell so this is far and away the best first-cutting hay we have put up in years.  Isn’t it pretty laying in windrows?  That hill made about 65 bales. 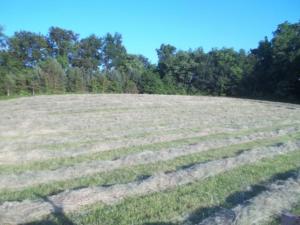 3 thoughts on “Mulberries, Hay and other Delicacies”