I like our Premier One Permanet.  I really, really like it.  But, since I have lost 4 pullets in 5 days to one dirty, stinking, filthy so-and-so skunk who is either bulletproof or can dodge bullets like Neo from Matrix and who can get through/under the fence in spite of a consistent 8,000 volts running through the permanet, it’s obviously not perfect.

I watched legions of raccoons splash at the pond night before last.  Raccoons aren’t getting through my fence and killing my chickens.  It’s a skunk.  One single bird each night.  Raccoons would kill several each.  The fence does a good job of keeping the raccoons out but can’t keep a determined skunk out.  It also failed to protect us from a mink once.  Neighbors are nice but they need to respect my property.  This kind of wanton property destruction and outright theft can not be tolerated.  Murdering a chicken is a capital crime if you are a skunk or a mink.  Skunks who murder and eat four chickens in five nights bring out the worst in me.

So I camped out at the pond, flashlight and gun in hand.  Just a tarp, an old blanket and the lumpy ground.  400 chickens make a lot of noise.  No skunk showed up to party.  I had to move the East side of the fence yesterday to continue moving the chicken tractors so maybe I filled in the unknown gap the skunk was using.  Maybe he smelled me.  Maybe he died a horrible death from a great horned owl.  I don’t know.  I won’t sleep well until I know.

The fence is not a perfect solution but it mostly gets the job done.  When it doesn’t, it makes for a long couple of nights and days of guilt, discouragement and stress.  At least it’s not cold out.  Or raining.  Yet.  Fortunately, the fence is 99% reliable.

Oh.  It’s raining now.  Well, that’s good.  It hasn’t rained in about a month.  Maybe the skunk will catch pneumonia.

I love my rifle.  I never imagined myself saying something so…redneck.  But I do.  Last winter a mink had a chicken by the neck…total hostage situation.  One shot took out the mink and saved the bird.  Raccoons molesting my turkeys?  Problem solved.  Rabbits escape their pens?  Got it handled.  Recently I have had an issue with a something tearing open bags of feed in my shed.  Early this morning the wife called out while walking the dog, “It’s a skunk”.

My poor rifle has never been used this early in the morning and was still asleep but it didn’t complain.  It fired two shots at the skunk.  The first shot scared it enough that it stopped running.  The second shot was clean…instant.  He didn’t know anything happened.  One second there was a skunk.  The next second there was dinner for a vulture.  In fact, the vultures really seem to like him.

That little stinker didn’t just stop at feed bags.  He’s been digging in my garden and generally stinking up the place.  I don’t mind a skunk if it just scavenges away from the house.  When they try to move in I have to take action.  I think he was digging up worms.  I need those worms…

I’ll say it again, I love my rifle.  It’s just what I wanted.  A stainless steel Ruger 10/22 with a few minor modifications.  It’s the cat’s meow.  Take some time to understand the gun laws where you homestead.  Learn to use the tool properly.  It’s a real help at times when homesteading.

Each year we find an American Kestrel or two in our yard.  This year is no exception.  They appear to nest in the elm tree in the corner of the yard.  You know, the one with the big burl up high.  You don’t know?  Come by and I’ll show you.  Anyway, this little fella posed for pictures on Wednesday. 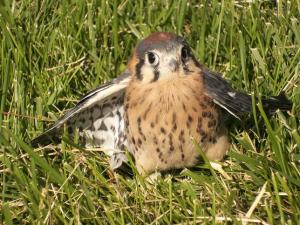 Not quite flying yet but very spirited.  There are probably another three or four around somewhere.  I would guess they are hiding in the tall grass on the other side of the fence.

They are fun to see each spring.  Last year one was just getting it’s wings as it chased a group of starlings.  It couldn’t quite turn as fast as the starlings could and it crashed into our house.  I found it hiding in the spirea under the window of the front room.  Boy was it ticked off!

Keep an eye out for little raptors but keep your hands off.  They are entertaining but very, very strong.